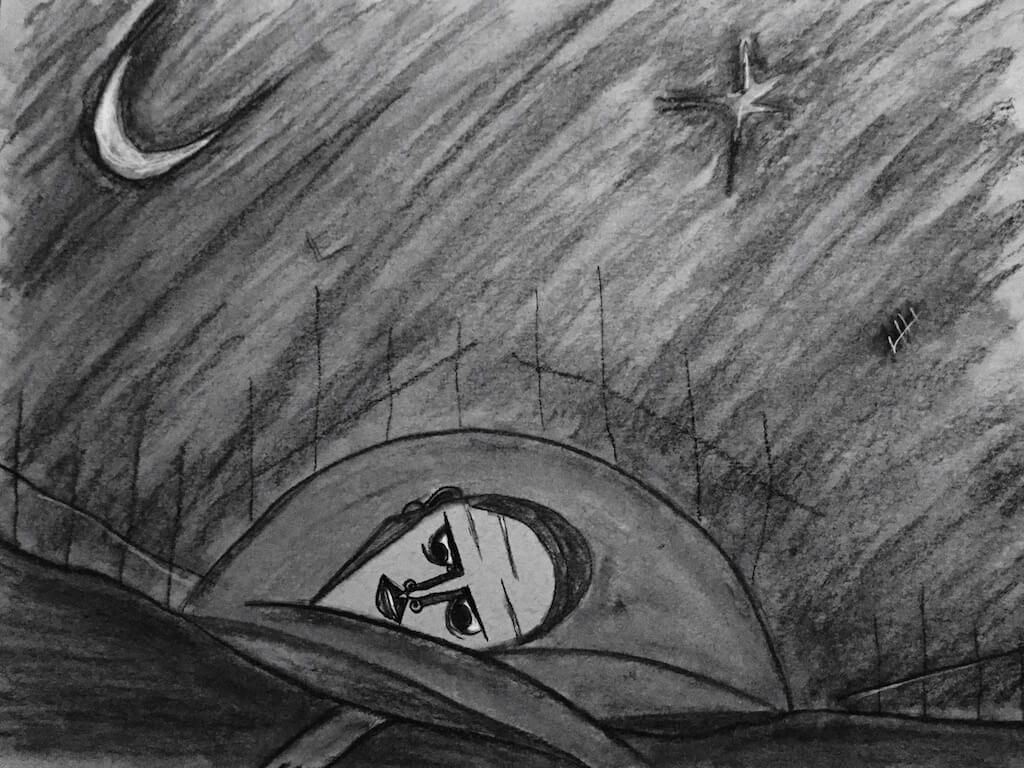 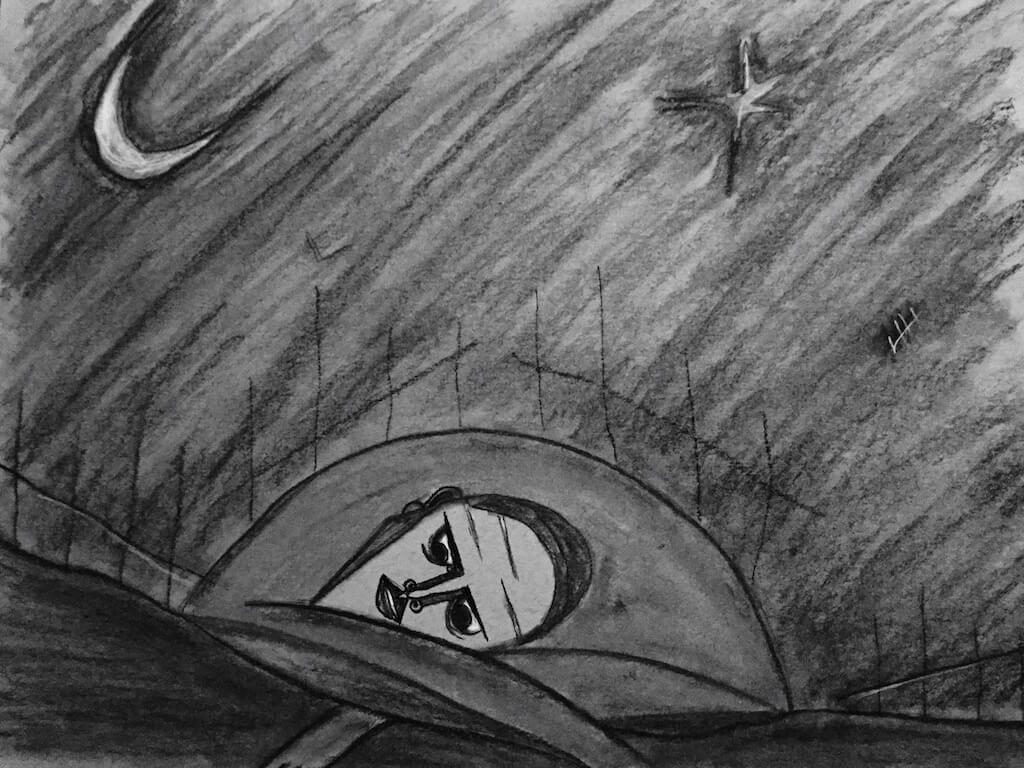 It gives him a lot of time to think.

This means that Ted is not surprisedhis wife is going to give up. You can’t live with somebody for so long and not come to appreciate their breaking point.

Instead of sleeping, he is using his computer to click on adverts. When they play he has the sound muted and hears nothing. He’s looking at the screen, but there’s no reason to think he’s reading the text or watching the adverts. A pad of paper and a pen are in front of him. When enough adverts have played, a message pops up in a banner. It is celebratory.

He marks the paper with the pen.

His tallies are four little fence posts standing in a field, crossed through, and they are repeated again and again and again. This page, also the one before it, and on and on for most of the pages of a thick notepad. And on the bookshelf to his left, more and more notepads, the space on the front to write your name crossed through. Who can count that many tallies? You might go mad considering it; perhaps Susan did.

This started when Ted retired and met other retired people at the places retired people go: bus stops after the morning rush but before the lunch rush; cafes after breakfast, when the servers are all bored waiting for the next busy period and take twenty minutes to make a cup of tea; supermarkets loud with couples arguing over the existence of room in the freezer for another half-price lamb shank.

One widowed businessman in particular, George, played bingo purely to find an audience. He’d target a spritely lady and say three things: first, that he did not know how to play bingo and please could she explain?; second, that he’d sold his company and was time- and cash-rich but company-poor (he would laugh at this pun); third, that he was setting up a charity because he did not want to leave all his money to his feckless children.

Ted had been part of the audience once. George mentioned how keenly he felt the selfishness of his (very wealthy) self-employed life, and that now it was time to help those more needy—excepting, haha, of course, his own feckless children. Little better than criminals . . .!

That afternoon Ted won the big cash prize. He took the £200 to Oxfam to ask exactly how many people it would help. Then he asked if there was anything he could do tomorrow, when he had no money.

So now Ted clicks on his adverts. When he’s watched enough, the banner tells him that one more child has a day’s supply of rice, or water, or medicine, or schooling. He likes the schooling best: he once wrote “f you give a man a fish . . .” at the start of one of his tally pages.

When his finger hurts from clicking, he looks for petitions to sign. Last Thursday he woke up Susan to tell her about the steep cost of malaria tablets, of the greediness of pursuing profit over saving lives. She waited for him to stop talking in order to ask: “So, are you coming to bed?”

He watched her until they both gave up waiting on an answer.

The week after she leaves something happens in his brain. Lack of sleep, lack of food, lack of hygiene. Months of staring at that screen in the dark.

The result is that, while Ted is not sleeping, he is still dreaming.

There is a storm, directly overhead. The power goes out.

For a time he still clicks. The adverts still appear. They are of smiling children who thank their Uncle Ted. The banners are more frequent than ever. They say fantastical things: whole families rescued, whole villages built, whole countries delivered from famine and disease and conflict.

It doesn’t take long for him to save the world; he stops when his clicks are buying candy for the feckless children of local ex-businessmen.

Ted floats up the stairs, moving in a straight diagonal line without his feet touching the carpet.

The bedroom curtain is open. The rain and the moon and the lightning give everything a ghostly luminescence. The dreamwash magnifies it, casting muted rainbows.

Susan is in bed. She is as young as she was when she first loved him and as old as she will ever be, and so is he.

He holds her and he manages one word: “Sorry.”

It is her turn to say nothing. Tonight the silence fills his heart until it bursts.

TL Krawec studies his dreams for diamonds but finds only coal.