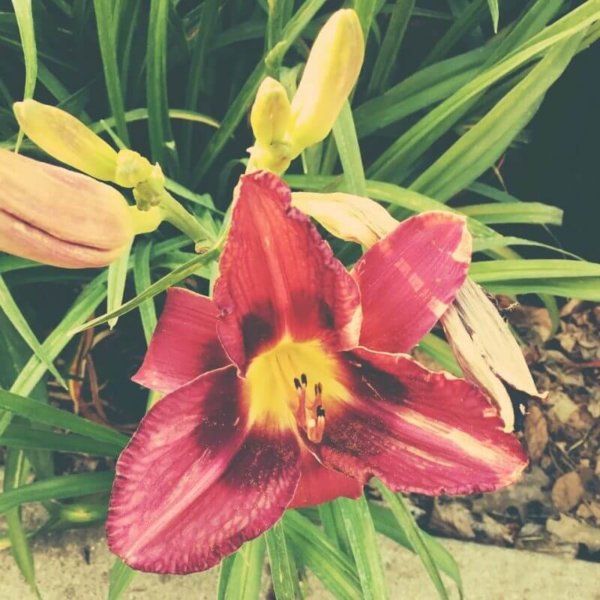 Janet Haigh was raised in the wilds of Tasmania and her writing is full of magic and myth. Her works have been published in Aurealis, Coastlines, The Flash Fiction Press, Newcastle Herald, and the speculative fiction anthology Sproutlings. She currently lives in Newcastle with her two delightful rug-rats and their witty father.

I drag the body across the asphalt, leaving a rusty smear over the damp surface of the road. The blood solidified hours ago and flies are exploring the dark ruff of the animal’s pelt, eager to get to work.

Turning, I look back down the hill. No hint of traffic, just the crackle, drip and birdsong of the bush all around, and the vapour of wet eucalyptus leaves steaming in the sun.

I can sense the boys in the back seat of the car; heads ducked low, eyes averted; mortified by what their mum is doing. I smile.

“What’s up?” I call through to them. A musty, sweet smell envelops me as I drop the heavy band of the wallaby’s tail and reach for a hessian bag.

Owen sinks lower in his seat but Joe twists around to look at me, his face screwed up like a bat. “You’re gross, that’s what’s up.”

How did I ever produce such delicate, little flowers?

“Good for the garden,” I lie, staring him down.

A laugh hitches the corner of his mouth. “It stinks.”

“Shut up.” He turns away to hide a grin.

Tucking the stiff tail and long feet into the bag, I heft the roadkill into the boot. There’s a shallow puddle of rainwater along the edge of the stopping bay and I bend to rinse my hands in it, dredging up the fine gravel to scrub at my dusty palms.

When I walk back to the driver’s side, the boys are racing to wind down the car windows.

“Phwoar! That stinks!” Joey crows, head out, gasping for air.

“It reeks!” Owen hacks out the other side, his silent protest forgotten.

I hop in behind the wheel and call “Seatbelts!” over my shoulder. Silently, I wind down my own window and, pulling the car back out onto the tarmac, I head for home.

Back in the garden, the branches of the greengage are heavy with cascades of plums; I’ve been neglecting them lately, I’ll have to prop them soon to stop them splitting from the trunk. Everything has grown so fast this year.

I press the heel of my palm against the tender tissue below my armpit. The garden’s growth seems to be in eerie parallel with that once-small kernel in my chest. Suddenly, every unfurling leaf had been painted with coincidence and deeper meaning. I’m seeing signs everywhere. My parents would have been proud—the gypsy heritage finally striking roots.

I lean on the spade, watching my boys through the kitchen window. Riffling through the fridge, they jostle each other for room like puppies, playful. At least they have each other.

To be fair, at last my lonely, migrant childhood may finally pay off some of its debt. All those melancholic afternoons I’d spent with my homesick parents, hunched around the pot of tea for warmth—eating black bread with Dad’s pickled fish and watching tea leaves swirl in the bottom of my cup—hadn’t been for nothing. Listening to their longing voices had been a spell all of its own and I’d soaked up plenty of the Black Forest tales over the years.

By anchor and ash. That had been the way of it in my father’s country and, right now, I’m desperate enough to try anything.

I look back at the fruit trees. Four of the stubby trunks have fresh mounds of pea-straw surrounding them. Below the mulch, the ashen form of each dead animal is shrouded in its own small bed of seaweed. In the Old Forest, it would have been lake reeds, not ocean fodder, but the traditional recipe has evolved to new locations before. It’s a representation of water and earth, the anchor and the ash, that matters. Tokens of life.

The day’s find brings my tally to three wallabies, a quoll, and a possum. I only need one more. It won’t take long; after all, the Island’s roads are littered with the corpses of unfortunate animals. It could have been worse, a person would have had to cut a few throats to work this kind of magic once.

I make a rough nest with the seaweed, the fine ends crackling while the bulkier roots are still rubbery. That same sickly musk clouds around me when I lower the marsupial in and I work to keep my breath shallow. I feel like my hands will never really be clean again. The kindling rises in a loose pyramid over the body and, when I set the wood alight, the damp seaweed steams, a metallic taste billowing in, expanding my lungs, as it casts off moisture.

The boys avoid me all afternoon, lazing about in the deep sun at the back of the house. Owen reads his latest second-hand sci-fi and Joe effortlessly distracts him, flicking rubber bands at his head and singing advertising jingles in a pleasantly innocent tone, until his older brother thumps him.

I can’t bring myself to look away from the delicate curve of a forearm or the glamour, the ease, with which they move, simply shifting position. They are golden and perfect and full of life and, for a brief, bitter moment, I glare up at the sun, eyes stinging, hating my lot.

My parents are gone. The boys’ father is a whirlwind of violence and fear that we’ve all narrowly escaped. I have no siblings, no aunts or uncles, no dear friends left to turn to. I can’t leave them yet. This has to work.

I don’t have the boys with me on Tuesday when I finish my shift. I’m fighting hard not to be jealous of their time, not to keep them greedily all to myself, not to give the game away. So, that afternoon, Owen is at a friend’s place for dinner while Joe is bussing his way back from the swimming carnival.

As soon as I see the black hump in the middle of the road, I pull up, breathless.

I roll it over with the toe of my boot. The squat, dark shape of a Tasmanian devil stares up at me with glazed eyes. Well. The animal seems oddly fitting.

“By anchor and ash,” I chant numbly as I push it into the bag.

This time, I wait for the sun to go well down before lighting the fire. The boys are returned home and already folded into bed, their young faces creased with sleep.

I’m watching the blue flames cinder the edges of seaweed and trying to keep my face from the fickle plume of smoke, when the storm sneaks in, its belly close against the trees. With the first crack of thunder, I turn rigid—a human animal caught in the headlights of the storm. A shiver of fear courses through me and I feel the terror of having tempted fate. Exactly what am I doing?

A quick zap, like strong static, channels through my skull and spine and, for an instant, the endless pinpricks of rain on my skin feel like a thousand European wasp stings, a poisonous ache that then fades quickly away.

I feel for the place below my left arm, the wad of thickened tissue that first signalled my grim, short future and my legs turn weak when I find that it is still there. Distraught, furious, I gouge at it, pushing it like fluid and it seems to dissolve suddenly, dispersing beneath my hand as if it had never been. I am paralysed with shock.

From behind me, I hear the sound of a door clicking open and a yellow light floods out onto the wet grass. Turning, I see Joe blinking at me from the warm shelter of the kitchen door.

Slick with the downpour, I’m a drowned rat. I stagger by him to towel off, to change, but I see his furrowed brow and halt, so proudly, to smooth it away with a cold thumb.

I gaze at him, lost.

I choke a little at that, afraid. “Fine.” How would he know?

“What’s going on?” Joe looks at me hard, his blue eyes narrow, searching for something off kilter.

“Nothing. What do you mean?” I hold my breath, waiting, trapped like a teenager sneaking into my own house.

He steps in, tucks his nose into the collar of my neck, and sniffs deep.

I remember him as a toddler, asleep in my arms, nuzzled under my chin.

“You smell weird,” he says.

Grinning, I catch him to me, tight, for as long as I can.

“Thunderstorms and blankets, hey?” Hell, I can live with that.