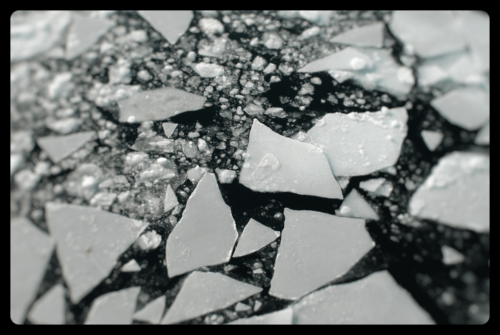 You were unhappy; this much is true. When he’d revealed after your wedding what he really was, you heard nothing but the winter wind howling in your ears. You told him it was fine but wept silently through the night once you understood. To be married to a bird; who would have thought?

The axe slices through your pinky finger and you watch as it tumbles into the sea. The littlest finger will become the biggest creature, the one they call Whale.

He wasn’t your first suitor; you were quite beautiful, and many Inuit men came calling, asking for your hand. Your parents begged you to accept but you declined them all: too tall, too short, too young. You were not willing to go from being just a daughter to just a wife. “What will they think of us, with a spinster for a daughter?” your father raged. “Sedna, you will shame us.” But you ignored him, too used to his rages for them to affect you anymore.

Then the birdman came along and fooled everyone, including you.

Your ring finger is the next to go, and with it, the twisted band he gave you when he asked you to marry him. The band sprouts fingers of its own, becoming Starfish. Your grip on the kayak loosens.

You loved him at first; he was thoughtful, articulate in ways other men weren’t. He promised you’d be more than a wife, more than a mother, if you’d marry him. And you agreed, because you loved him and because it would make your parents happy. On your wedding night, after he’d taken you to his island, he shrugged off his skin to reveal his true shape. Arms gave way to feathered wings. His mouth became a sharp, imposing beak. “This is who I really am,” he said. And you cried, in love with who you thought he was, but not who he turned out to be.

He cuts off your middle finger next. Below you, it blooms into a creature who you silently name Fish.

He said he would provide for you, give you the best furs to keep you warm in the frozen winters. But you soon found out this was a lie. When you asked him about the furs one night, he said, “I am a bird, Sedna. I cannot hunt. You understand,” and his bird friends, huddled around the campfire with you, laughed at your ignorance. You didn’t understand, and at night you huddled under the thin blankets he provided, shivering and trying to keep the cold at bay, unwilling to turn to your husband, the birdman who lied.

Your index finger falls into the water, the edges of skin stretching and transforming until it is Jellyfish, and your right hand squeezes the edge of the kayak harder.

Your father came to visit; you promised yourself you would be strong and not tell him the truth, not wanting to admit you were wrong about your husband. But you were never a good liar; out by the campfire, you broke down and told him everything. He, enraged at the mockery the birdman had made of his family, told you he would take care of it. You knew what he meant, but you pretended you didn’t so you could sleep at night

The thumb is the most painful so far and that pain gives birth to teeth in the mouth of Shark. You dangle from the boat by only one hand now.

You didn’t follow your father as he pulled out his gun and walked back inside, so you didn’t see your husband’s death, only heard the gunshot followed by the terrible squawk as you tried desperately to block your ears. Your father reappeared. “Let’s go. Now,” he said as he pulled you toward his kayak. You got in the boat, too shocked to resist.

When he continues down your fingers, cutting your other thumb, it elongates and sprouts fins, becoming the creature to be called Dolphin.

The boat had barely left when you heard it, the first drawn-out shriek of sorrow, quickly joined by more; his friends had found him “What is that?” your father asked. You urged him to row faster, but he could not row faster than they could fly. You heard the beating of their wings and saw them approaching. The sky darkened as their wings blotted out the sun.

You don’t notice when your index finger is severed; your remaining fingers have already gone numb with the effort of holding on. When you look down, you see it has become Octopus.

Your father rowed and rowed, but still the birds kept gaining on the little boat. “They know,” you said, and he tried to row faster. As they drew closer, the water started to churn. The winds grew stronger as the birds reached the kayak and circled above it, drawing the wind into their wings and spinning it back out. The wind created waves, little ones, then bigger ones, splashing over the edges of the kayak, shaking it back and forth. “We will capsize,” your father said. He looked at you, and there was no love in his eyes. “This is your fault.”

Your middle finger grows tusks, born out of the shreds of fingernail that were left after it scraped the side of the kayak. It balloons into a massive creature, Walrus.

“It is you they are angry at,” your father said. You did not point out that your father was the one who pulled the trigger. You’d seen a similar look in his eyes too often, if you dropped a plate or if he felt you weren’t properly grateful. The kayak lurched dangerously, and you weren’t terribly surprised when he pushed you over the edge. But you grabbed on, not willing to give in.

Your blood froze with your skin when he pulled out the axe.

Your ring finger is gone. Claws blossomed from it as it transformed into Lobster. You hold on desperately by your last finger, also your weakest.

Your grip won’t last much longer; it’s almost a relief when the axe swings up again for the final blow. Above you, the birds circle faster, unmoved by your father’s offering of the sacrificial lamb.

You feel a moment of satisfaction that your death will not save him before the axe falls and you have nothing left to grasp with, falling with your last finger, which becomes the tiny Shrimp.

You sink into the icy water, strangely calm. The creatures spawned by your fingers circle around you, their mother, and you stare at them in wonder. If this is the cost of your sacrifice, it is a price you are willing to pay. You will be worshipped more down here than you ever would have been up there. Not a daughter, not a wife, but Sedna.

The power of the ocean fills you, and you breathe it in like you once did air.

Chelsea Hanna Cohen works in publishing by day, writes by night, and can often be found reading instead of doing either of those things. Her work has previously been published in freeze frame fiction and Every Day Fiction, among others. You can find her on Twitter @chelseahannac.