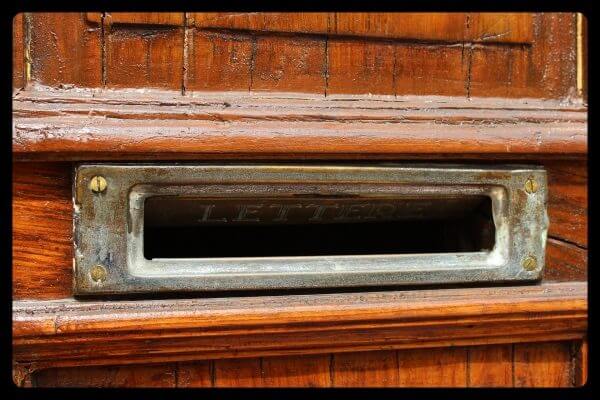 The mailman stopped short before the enormous work boot, and looked again at the letter in his hand. It was addressed to Mrs. Mungo Oliphant, Size 99 1’2 EEE, on Drury Lane.

It was a pretty big boot, the largest  he’d ever seen.

In the front of the toe he found a brass mail slot, just below the doorknob. That a door had been hung in a shoe did not surprise the mailman. After nine  years on postal routes, nothing surprised him anymore.

Over the next hill, the  brothers McSwine had built neighboring houses, one out of straw and one out of twigs. At least the eldest brother Sterling had built his out of bricks.

The shoe appeared to be made of weatherproof materials, and it had a nice thick rubber sole.

Children were yelling inside the shoe. Given the assortments of howls and squeals, there were quite a few of them.

A woman with a mop of tangled red and grey curls stuck her head out of an eyelet and looked down at him.

“Are you the mailman?” she asked.

Since he was in a mail uniform, and carrying a mail sack,  he simply nodded.

He could hear a lot of clattering. Evidently the shoe had stairs. After a few moments, the door burst open, and a the woman popped out, smoothing an apron that seemed to be splattered in gravy. She looked somewhere between fifty and infinity, age wise. Lines creased her eyes.

“I’ve a letter for you ma’am,” said the mailman. “Just getting ready to put it in the slot. Interesting house you have. Looks like a shoe.”

“Fancy that! It is a shoe,” said the woman, her tone tinged with exasperation. “The bastard left us flat, and all he forgot was this damned shoe. So I told the kids, I guess this is home now. Never marry a giant, my mother told me. You’ll regret it. But did I listen?”

“This was your husband’s shoe?”

“Yes. I wish I had the pair of them. I could have so much more space for the children, if I had the other shoe. There’d be room for more bedrooms, and another bath. I can’t imagine how the big oaf lost it—how does anyone lose a shoe this big? Strangers are probably squatting in it, I’m sure.”

“Please do! It can’t have gone far, I’m thinking. They usually travel together, shoes, don’t they?”

She extended her hand, after carefully wiping it on her soiled apron front. “You said you had a letter for me?”

He handed her the envelope, and he could tell by her crestfallen expression it wasn’t what she had been hoping for.

“An offer for satellite television!” she wailed. Tears sprang in her eyes, and she wiped them with her dress sleeve. “As if we could afford that! I can hardly keep these brats fed. Have you any idea how fast half giant children grow? The baby’s the size of a ewe, and the triplets, bless them, are six feet tall and they are only four years old. What am I to do, I ask you?”

“That big lout? He’s returned to his first wife, he has. Lives at the top of a beanstalk, he says. He told me they were divorced. Something about losing a goose who laid golden eggs. But now, it seems, the grass looks greener at the top of the beanstalk.”

“Ah,” said the mailman, watching the woman blow her nose on his once clean white handkerchief.

He could hear the noise of children wailing inside the shoe. There seemed to be quite a few different howls.

“How many children do you have, exactly?” he asked. “Are any of them old enough to go to school?”

“There are nineteen little blessings, exactly,” she answered. “Giants don’t do anything by halves. Four sets of triplets, three sets of twins, and one Josephine.

The mailman looked at the shoe, and once again wondered how it had been possible for the giant and his wife to do anything at all of that nature, but mailman respect the privacy of their customers.  On the other side of the forest, there was a girl living with seven tiny men. Quite a normal looking young woman. But one couldn’t allow himself to wonder.

“Josephine, bless her heart, takes after me in every way. I’m not sure why. She doesn’t seem to be giant at all. Except, that is, for her hair. Perhaps it’s because she was so premature. Seven months baby.”

“She has giant hair. Something from his mother’s side of the family, he said. Her hair grows so fast it’s hard to keep up with. I suppose we could sell it, if things continue this way. There’s quite a market for nice blonde hair, I hear. For wigs and such.”

“I never heard of such a thing as giant hair,” the mailman said politely.

“Josie,” the woman yelled. “Toss your braid out the window, there’s a girl.”

“Aw Mom,” complained a voice from the top of the boot. “Is this another stupid fire drill?”

“I’ve told Josie, in case of a boot fire, all the kids can climb out down her hair. It makes a great rope, when she does it in a braid, you see.”

In a few moments a heavy golden rope of braid came snaking down the front of the shoe. It did look very much like a regular rope, until one looked closely at it.

“Josie’s the eldest. My pride and joy,” said the woman.

“And her father was a giant?” the mailman asked, as the face of the girl appeared at the end of the braid.

She looked normal and human.

“What kind of woman do you take me for? Mungo asked me the same thing, the bastard.  As if I’d ever so much as been alone with a man. Except for that Prince of course, who asked me to put my foot in his glass shoe.”

“He asked you to what?” asked the mailman.

“Put my foot in his shoe. He asked all the girls to put their foot in his shoe. It wasn’t’ t as if I was special, or anything. Although, for a moment there, it did look like it fit. Pity. He said I’d be Queen of the whole realm if it fit—the lines these men who come to the door have!”

“A pretty girl like you must have had a lot of men at the door,” said the mailman, trying to cheer her up. She might have been a beauty in her youth–the bones were good. He was hoping he’d get his handkerchief back so his wife could wash it. He liked his big linen handkerchiefs.

“Not another Prince,” the woman said, tears beginning to run again. “He said he’d come back, if there wasn’t a closer fit. He promised, you know. Then I heard he found her. And she had the other damn shoe. So of course, he married her instead.”

“I hate shoes,” the woman said, blowing her nose on his handkerchief. The mailman resigned himself to letting her keep it. He certainly couldn’t put such a nasty article back in his pocket.

She retrieved an envelope from her apron pocket.

Top of the Beanstalk

“I’m not sure we deliver to the top of the beanstalk. But perhaps if I send it Air Mail,” said the mailman. “Have you an extra stamp?”

The woman fished in her pocket and produced another stamp and affixed it to the envelope. It had a splatter of gravy on it.

“I don’t suppose they’ll care, do you?” she asked the postman.

She began to cry again, wiping at her cheeks with the now sodden handkerchief. The mailman tried not to look. Such displays of emotion disturbed him. His wife rarely wept. He had not seen such emotion since Mrs. Dumpty’s husband fell off the wall.

“Do you know what I did to the children last night?” the woman said in a low whisper.

He was not at all sure he wanted to know. The mailman shifted his pack, and thought about all the deliveries he needed to make.

“I had to feed them broth for dinner. Broth without any bread. We have no bread in the shoe at all.”

“And the children were so hungry. They kept weeping and begging for something more.”

She clenched her hands in her dirty apron.

“I whipped them. I’ve never whipped them before, you know. Vowed I’d never lay a hand on my babies, not like my father did.”

The mailman stared hard at the road, wishing he was walking up a distant hill. Passing the huge shady tree on the right. Far enough away that the shoe was a spot on the horizon.

“I’ll make sure that your letter is delivered, Mrs. Oliphant,” he said at last. She extended the mangled handkerchief but he shook his head. Mrs. Mailman had done some fine embroidery, his initials, “M. M.” It seemed a shame, but a greater shame to return it to his wife in his condition.

“Can I ask you a question?” she asked. The look in her light blue eyes grew intense, and all the surrounding creases deepened. “I haven’t seen a soul in weeks, you know. How old do you think I am?”

Oh mercy, the mailman thought. Of all the dangerous questions in the universe. Ask me anything else.

“Since Oggie broke my mirror last month, I can only see round the cracks. But what I see frightens me a bit.”

The mailman hesitated and swallowed. He could hear a small child singing, improbable as it might seem that this older lady had given birth that recently. But stranger things happened in the neighborhood. An old woman had given birth to a baby girl no bigger than her thumb. The child stayed small.  Beautiful little lady, studying electronics at university now.

He couldn’t say anything older than forty. Even forty was dangerous. But now, in the harsh light when she leaned further in good light, she looked sixty. Or more.

Her face sagged more, if that was possible. He could see the flood of tears starting again.

“I thought so. I’m thirty-three next month. Damn giants. I’m not a young maiden anymore, but hardly a crone.”

He watched the unpleasant handkerchief rise to her face once again, now uselessly damp.

“I’ll make sure he gets that letter,” the mailman said. “You should have a cup of tea.”

Mrs. Oliphant slammed the door in his face.

As he strode off, he hoped the McSwines were in a less talkative mood, that the wolf who had moved in nearby wasn’t giving them trouble. There was always lots of mail to deliver to the brothers, now that they had discovered internet shopping.

He also hoped that Miss Muffet hadn’t fallen off her tuffet again.  Lifting her had strained his back.

Neither snow nor rain nor heat nor gloom of night stays these couriers from the swift completion of their appointed rounds.

Herodotus wrote that motto, the mailman thought. The old fellow knew everything. He probably had a quote somewhere about not marrying giants. How big would half-giant children grow?

He would keep an eye out for the missing boot. She was certain to need more room, even in a 99 ½ EEE.

Elizabeth Archer has published short stories, poems and flash fiction. She lives in the Texas Hill Country and is currently working on a novel. For recreation, she tends a garden of poisonous herbs and rescues feral cats.