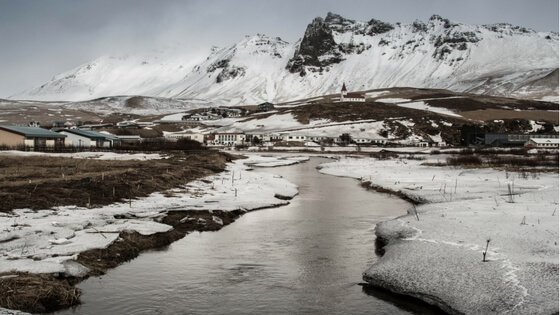 The darkness makes everything risky, every step fraught with invisible scuttling, chittering and struggling away of tiny creatures—mouse, perhaps, terrestrial bird imagined—or invisible elves—under step. We are near Bárðarbunga, Iceland, a recently quiet volcano, and in the distance, a house that was once a house, but is now half lava flow, cooled into rock, spilling out of windows, and the other half a house emerging from that rock, crushed slightly, as though exhausted by the weight of everything, as though it were sighing, being either consumed or born from the fire.

My father is a genius. One of the evil kinds. He intends to end the world. “The safest place for us,” he says, “is here, almost on top of the world.”

Except, there was never supposed to be an explosion. People turning colors. Pieces of asteroids falling through whole, refraining from their usual burn in the atmosphere. It was a setback. Now his inventions never work right. His bombs fizzle. His death lasers fail to even burn paper, much less explode the moon.

After the explosion, I started tinkering with his concoctions whenever he isn’t looking, whenever he goes on his “thinking walks” in the lava fields. “Don’t step on the moss, Poppa!” I say, but what I’m really saying is “Stay out there longer, I need to save us. I need to save us all.” Then I tuck into the tiny gears, erase schematics, break wires, and drip honey onto cooling units. My father isn’t really evil, he just thinks big. I believe he knows that I mess with his work. I suspect he lingers on his walks, talking to the elves, pleading with the aurora for the next big idea that will take out the villains in power.

“Who do they think they are, Gracie?” he would say to me in the mornings, which don’t feel like mornings because of the night sky, only skyr and cloudberry jam to mark the new day. “How can they let the police run the government? They are insane! Inmates are running the asylum. The president wraps himself up in a flag while bending over the constitution and dropping a steaming turd right on it.” He never could keep himself from reading the American papers.

“We’re in Iceland now, Poppa,” I say, pulling gently at the paper. “Why does it matter what they do?” This matters greatly to him. The new president is, I fear, one of the people Poppa wants most to touch with the death laser.

I replace my father’s newspapers with novels, try to redirect his passions, but it feels like just another steam vent to fuel his grandiosity to retribution. He draws on the tablecloth. This time it clearly involves a giant drill into the earth. I roll my eyes.

Sometimes while he works, I take walks by myself. I visit the house with the cooled lava rock. If the house weren’t here, I wouldn’t know this lava was special. If the lava weren’t here, the house wouldn’t be special. Did the people know it was coming? Did they get out and leave in time? It must have felt like the world was on fire. Now, the air is cold and pure.

Back home, Poppa draws on napkins, tea towels, the bare white walls. At night, when he falls asleep into his fish chowder by the fireplace, I open his latest creations and manipulate them. Pinch connections apart, untwist spark plugs from their moorings, redirect reflection mirrors.

Together, we push and pull toward and away from each other, house and rock, tide and the shore.

Wendy Wimmer is a Black Mountain Institute PhD fellow in Fiction at UNLV. Her work has been published in Barrelhouse, Blackbird, Anomaly, Per Contra, DrunkenBoat and more. She is a fiction editor at Witness Literary Journal and teaches at UNLV. She is on Twitter at @wendywimmer and less frequently at www.wendywimmer.com.