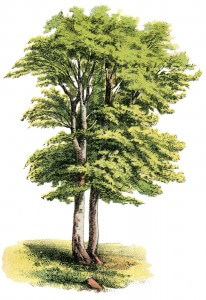 When we here at Syntax and Salt started talking about creating a place to showcase magical realism short stories I knew there would be pieces from within our group that would do so well at setting the stage for our project. This piece by Jen Todhunter makes me think of a flame cupped against the wind while you stand outside. The magic is subtle and the interaction is lovely. I hope you enjoy The Alabaster Man as much as I do. This story first appeared in Cease, Cows in July 2015. — Ani King, EiC

I met Ben in the park on a Wednesday evening, when a yellowed slice of moon hung sideways in the sky. A humming reverberated between his lips, his vocal cords conducting an orchestral masterpiece. He sat beneath an old willow tree, its wispy arms sweeping the grassy floor. I thought he was a statue at first, an alabaster carving of solitude captured in stone. When he smiled, it was the kind of smile that cracks a face. He was like, do you come here often? and I was like, often enough.

With gnarled knuckles on hands that shook, he passed me a bottle of bourbon. It loosens the spirits, he was like, and I was like, that’s good, I need mine loosened.

We sat, our backs against the weathered trunk, two strangers watching the world twist futures on the stage prepared before them. Ben’s shoulders hunched with age, mine with a defeat only the worst kind of apathy could shape. A gaggle of geese took flight, brushing the pond with their wings as they rose into the darkened sky.

Your song is beautiful.

It crawled in yesterday and I haven’t been able to stop humming it since.

We drank until the tune became a bond between us and, even though I knew nothing about him, Ben felt like a dear friend I’d misplaced while fixating on the uncontrollable circumstance of heartbreak and depression that brought me to the park in the first place. Your music made my week.

Ben’s tufty, white hair waved in the purple shades of the nighttime breeze and he was like, I want you to have it.

It wasn’t mine to have, but my protests were ignored. Ben gripped the tail of the dancing earworm between his index finger and thumb, then pulled it from the depths of his mind. I downed a long pull of bourbon as he placed the tune at the edge of my ear. It tickled as it slid down my canal, through my drum and into the crook of my Eustachian tube.

It’s the nicest song anyone’s ever shared with me.

Ben smiled, closed his eyes and listened to me hum. He was like, it sounds better on your lips.

Jennifer is a number nerd by day, word fiddler at night. She enjoys dark, salty chocolate and running top speed in the other direction. Find her at www.foxbane.ca or @JenTod_.