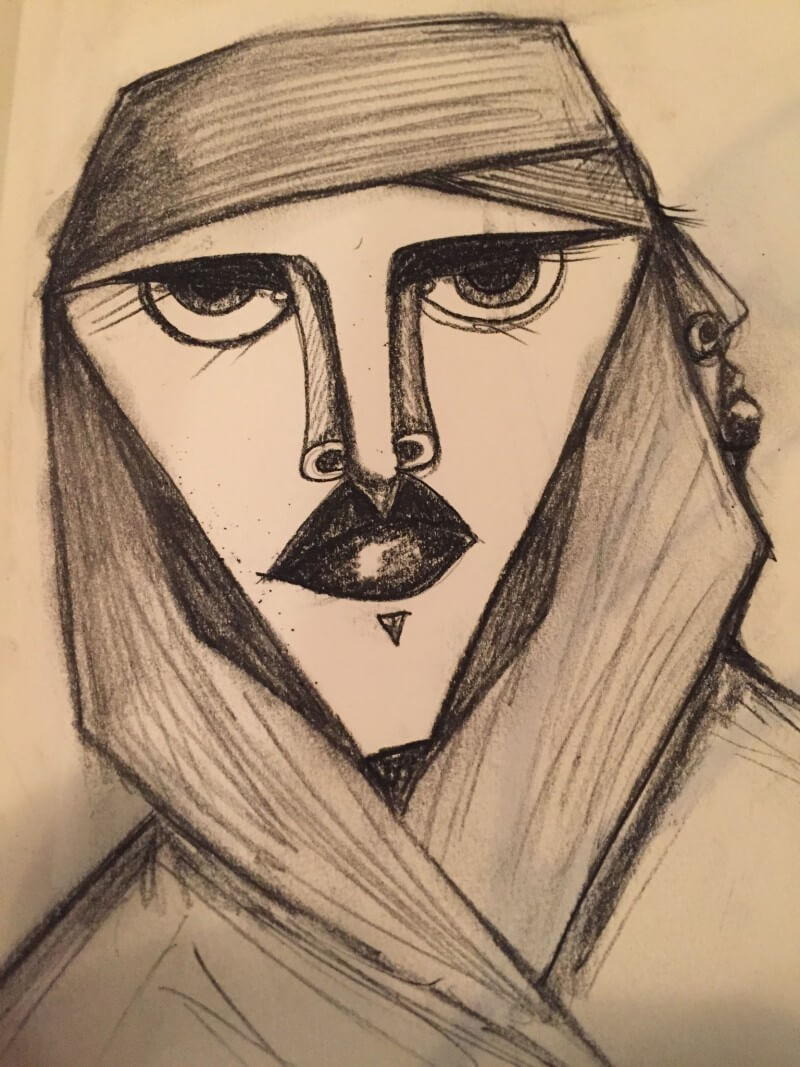 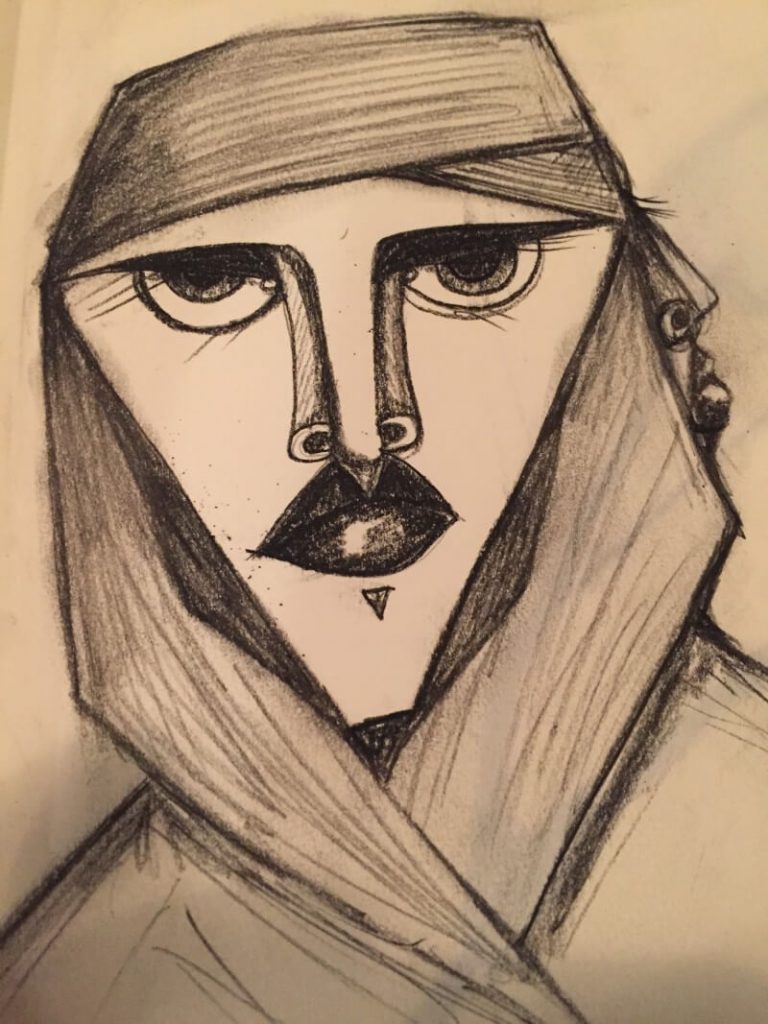 “Naflah is very beautiful,” Father says as he guides Fazil into the majlis. “Much more beautiful than the first sister. Come and see.”

Fazil enters the room, followed by his three wives. He is tall and smug, a picture of self-righteousness and power. He wears robes purchased with our dead sister’s gold; he demands coffee and dates from our servant woman. Father motions for the girl to bring them, to satisfy Fazil’s thirst and hunger while he decides. We know coffee and dates will never satisfy his monstrous appetite, yet we are anxious to please him.

Our custom permits the sheikh one look at a chosen bride before signing the marriage contract, and Father has his reasons for honoring the request.

“Which one of us shall it be?” My second sister’s whispered words slip into my ears beneath the veil, and I remember another day in the majlis, a September day of two years gone. The day Fazil bought Jamila.

Fazil chose Jamila for his fourth wife in the time it took her to slide the black cloth to one side, revealing her perfect face. The contract was signed, the negotiated dowry paid to my father, and Jamila—worth far more—handed over in return.

There was no wedding celebration, for Fazil abducted his new bride with the same quickness with which he chose her. We did not see our sister again.

The marriage lasted four moons—long enough for Jamila’s sister-wives to persuade Fazil to rob Jamila of her worldly goods and distribute her jewels among them, before robbing her of life.

We mourned our sister when we heard the news. Our father swore revenge.

Fazil waits impatiently as I uncover myself. It is a delicate act, my partial removal of the veil, one I have never performed before an outsider. I hear my sister’s voice cautioning me to be careful, to only reveal what is necessary to reveal. Fazil orders his wives to help, and I will my fingers to work faster.

“Hurry,” Aneesa speaks softly to me under the cloth.

At last, I stand before him, modesty burning my right cheek. Fazil looks upon my unveiled eyes, my carefully exposed lips that quiver under his gaze, my nose that twitches at the unfamiliar scent of musk and myrrh.

Fazil turns to Father, smiling his false smile, the smile of a trickster. “You were correct, and I see that the name you bestowed suits her well. She is abundant with beauty.”

“You will have her, then?” Father says. “You do not wish to see her sister?”

I sense my sister’s smile under the veil as Father speaks.

“I have seen enough. I will have Naflah.”

Father demands the bride price: upon the sheikh’s death, his wealth will transfer to the fourth wife. Such an imbalanced split is against custom, but the sheikh nods.

I allow the veil to fall into place. Aneesa warns me of the danger, and Father smiles for the first time in over twenty moons as he signs the contract.

No celebration is planned, no festivities announced. Fazil slips me away to the villa we will share with the three sister-wives. He urges me to remove my veil when we step across the threshold; I insist on keeping it fastened until we are behind the master suite’s locked door.

“I will allow your modesty tonight, and only tonight,” he says as he runs murderous fingers along the cloth hiding my face. I turn my head quickly, burying Aneesa into Fazil’s silk robes.

“You must be swift, sister,” she whispers to me beneath folds of black.

I know my task. I am to occupy him; she will manage the rest.

We are in our marital bed—the same he shares with his other wives, the same he shared with Jamila before he struck her dead. He has not yet ordered me to remove my veil.

“You know what to do,” my sister says.

I do. Although not practised in such affairs, I have studied and understand the positions, the techniques, the final act whose execution I am compelled under law to allow. I feel Fazil simultaneously weakening and stiffening as I work on the preliminaries, tantalizing him, distracting him so he will not feel my sister, my other half, when she bites into his most tender parts.

We act together and we act separately—I enticing our husband with my mouth, my sister tearing at his flesh with hers. The two-faced sheikh is gone with a minimum of struggle, but we allow him another look at his chosen brides before he expires.

Though death comes quickly, it is not painless, and the sheikh cries out one last time. I feel Aneesa’s smile as it tightens our left cheek; I taste the ferrous liquid on her lips, so close to my own. I hear her whisper again, “Naflah, my sister, we have avenged Jamila.”

The sister-wives fumble with keys, rushing into the room that once was their own. Sheikh Fazil lies in a sea of blood upon the sheets. They point and scream at our atrocity. “Monsters!” the first cries. “Monster!” the second corrects. The third cannot decide whether we are one or two. They flee into the darkness, believing us to be the Devil’s work.

They are wrong. We are the work of God, of Allah, of Nature.

Father embraces us on our return. We wrap our two arms around him. He kisses our lips, mine first, then Aneesa’s. He touches our four eyelids, slides a tender finger down each of our noses, congratulating our success, calling for tea and dates.

Aneesa caresses my cheek with our left hand; I return the gesture with our right. “We did well, sister,” she says.

I smile a smile she can feel. We are two, yet we are one. And the two-faced sheikh did not see us coming.

Christina Dalcher is a linguist who flew from syntax to phonology to creative writing. Her short work appears in Zetetic: A Record of Unusual Inquiry, Pidgeonholes, and others. Find her tweeting @CVDalcher.