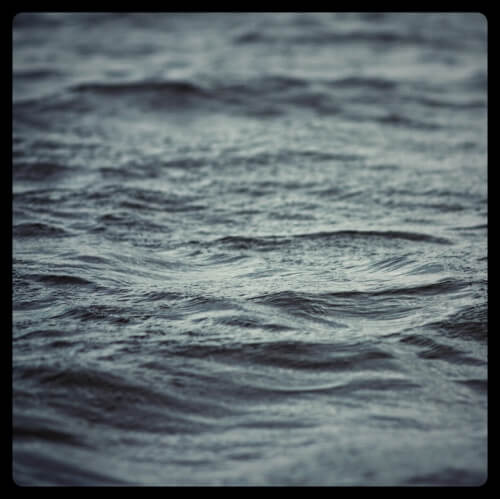 The harpoon slammed into the body with a wet thud. Muscle and skin contracted as it flinched away from the sharp intrusion. The rope anchored to the bow drew taught. The boat lurched forward as the whale thrashed its powerful tail in an attempt to get away.

The second harpoon struck true and fast. My father grabbed his lance as the men pulled us alongside the tired and injured animal. The oval blade was razor sharp on both edges.

He plunged it into the side of the whale, like a hot knife through butter. He withdrew the lance and struck again and again, until the water spouting from the whale’s blowhole turned crimson.

Several whales from the pod circled near the boat. Spiral tusks pierced the water like fingers of blame. A grey male swam fearlessly next to the boat, calling to its injured mate. I turned my back against the accusation in its eyes. Spray from the surf mingled with the salt from my eyes.

My father placed a bloody hand on my shoulder. “Trust me, son. When the snow falls and wind comes howling across the bay, you’ll thank me for the meat in your belly and the fat for the fire.”

The men sang as they rowed us back toward the village. Our prize tied to the stern, gulls cried and swooped above our heads, diving into the bloody wake we left behind.

Our triumphant return to the village was greeted with joyful cheers. We dragged the carcass onto the black pebbles, wet and shiny, like thousands of teary eyes.

The whale was divvied up between all those in the village; my father received a larger portion—it was our boat that caught it. We wrapped the meat and blubber in oiled skin and took it back to our hut. Darkness fell quickly and with it the temperature.

The wind picked up and black clouds rolled in from the sea, turning the azure waters ominously dark. The mournful cry of the whales could be heard all night as they circled the waters in the bay. They had never ventured into the bay before.

The sadness in those cries resonated within your soul. Even my father looked unsettled where he sat in front of the fire, pulling on his pipe.

The red glow from the bowl lit up his face. Smoke rose in spirals through his long hair and disappeared up into the rafters.

“Get yourself to bed, boy. We’ll have an early start tomorrow.”

I slunk up to the loft. Outside an elemental monster howled around the corners, tapping the windows with wet icy fingers and flaying the roof tiles with biting winds.

Looking through my window I could see the bay whipped up with foamy waves. I turned away from the window, but movement on the beach caught my eye. I pressed my forehead against the pane, ignoring the cold. One of the narwhal whales had beached itself.

I spun round and clambered down the ladder.

“A whale beached itself on the shore, father!”

He jumped up and dragged on his sealskin coat. “Are you sure? If I go out there to get wet and cold for no reason, you’ll be going to bed with a burning hide.”

My father grabbed his lance. “Get a torch.”

I pulled on my coat and lit a torch from the fire. We left the warmth of the house and walked into the blustery wind. The torch spat and the flames jerked every which way, throwing strange shapes and shadows on the ground and walls.

“No, if we can take this whale on our own, our status in the village will be elevated. I might even stand for chief.”

“Will that make you happy, Da? Being chief?”

His footsteps faltered slightly, but he didn’t answer. We walked down to the bay and onto the beach. The whale song had stopped. Apart from the wind and the guttering of the torch it was eerily quiet. Not even the dogs barked.

I looked back toward our hut to try and gauge where I saw the whale, when my father gasped. I turned toward him, raising the torch.

Emerald green eyes reflected in the light. A gigantic grey horse stood looking at us.

“Impossible,” my father whispered, staring at the ivory horn protruding from the horse’s head.

The horse snorted in response to his voice. A spray of mist came from its nostrils as it charged.

He turned and pushed me ahead. “Run, boy!”

The horn entered his back and came out through his chest to pierce deep into my own shoulder. The unicorn turned and slowly walked toward the water.

My father grimaced as he pushed me away from him. I screamed as the horn pulled free from my shoulder and I fell into the shallows.

The unicorn kept walking deeper into the water. It changed shape, like an iceberg melting in warm water.

The narwhal disappeared into the dark, cold depths, my father speared to its horn like a grotesque living figurehead.

I was only ten, the night the unicorn whale came for my Da.

Born in South-Africa and raised in a small farming community, Wiebo only had his imagination and nature to keep him occupied, until he discovered the magic of books. He fell in love with the worlds and characters within from an early age. He soon started to make up his own stories and these stories developed voices, which clamoured to be heard. So he writes. Twice shortlisted for the Fish Publishing Prize and various stories published in Molotov Lit, National Flash Fiction Day and 101 Words, Wiebo is currently focusing on editing his novels for publication.