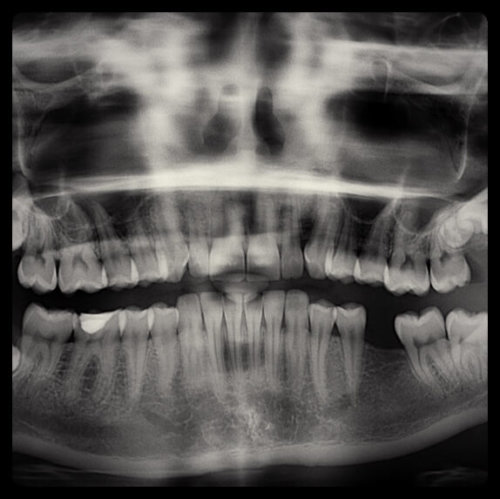 By the sixth day I was more pain than person; unplugging myself, piece by piece, from the rituals and routines that tied me to the rest of my race. I arched and roared, swiped palms like paws across my cheeks. But still I wouldn’t let them take it.

I slept in dull bursts of drunken exhaustion, woke too soon with the grainy aftertaste of gin trapped sour between my swollen gums and tongue. And there was always a moment of calm, a soft waiting, that made the rushed return of ache almost worth it, just to experience a world without it.

At the dentist’s surgery I listened to lectures on sepsis and tried not to make eye contact with the tooth fairy standing in the corner of the room. This fairy was a stranger to me, their attempt at a different tactic. His beauty was distracting: his trousers clung, and he ran long fingers over his lips while he tried to menace me with his smile. I chewed down hard on the screaming tooth and swallowed agony with gratitude, squeezing my eyes tightly shut before my limbs got lazy with want and my hand in his, my hands in my mouth, became a certainty.

They wanted this one so much. If I could have trusted my dentist to rip it from my jaw and pass it straight over, or trusted myself to stay sharp enough to snatch it from his pliers and swallow it down even while I bled and reeled in the chair, I could have let the pain be over. But the tooth fairy, whichever tooth fairy would be assigned to lean against his arm while he braced himself for the unrooting of my rotting wisdom, would have been waiting eagerly, quicker and stronger than me. They wanted this one so much.

My greedy child self had valued the shine of coins over the lesser gleam of milk tooth, had slipped each bitten memory thoughtlessly beneath my pillow at night and dreamed of boiled sweets and rag dolls. Once money has changed hands the forever deal is struck. Your teeth become theirs when they leave your mouth. Always, all of them.

As the years loosened more teeth the coins became more tarnished, the visits to the dentist more frequent. Cavities hollowed warrens through my canines; molars became brittle shells of enamel and pulp. My wisdom teeth bookended decay, but even while their lesser companions rioted through abscess and then absence they clung to my jaw. And that’s when I first saw the tooth fairies.

They came at night while I slept, laden with a pot of treacle so weighty it took three of them to carry it to my bedside. They guided my fingers into the dense sweetness and then into my mouth, held my head and hushed me tenderly when I half woke and tried to turn away. The mornings became sticky and dizzy, my appetite trailing behind the clock until my blood crashed into the ebb of night-time feasting and I’d reach for something sweet to lift me again. Still my final teeth, in their wisdom, remained hard and strong.

The fairies scattered piles of ancient rusted coins on my pillow that stamped brown patterns onto cotton and skin. I stacked them on the windowsill, unspent. They seduced me with glittering jewels, left rubies by my dinner plate and sapphires in my shoes. They danced with me when I came home from work crying, spun me from room to room so that I could almost believe I was made from silk or feathers. I began to stay out later, turn the radio up louder, keep my arms closed around my body, my mouth a tight thin line, my lips stern sentries.

So the tooth fairies stripped themselves of their costumes and showed the bone beneath the sparkle-mask. They took me from my home and led me to an orchard. A spiral maze of trees, a maze to lose yourself in, uncurled toward forever. Fruit of every kind lay rotting on the ground, spilled from baskets and oozed from juice presses. Fairies filled tankards and drank, raised glasses to each other and cheered.

I stepped close to one of the trees, a greengage plump with fruit, and reached a hand to stroke a branch. The bark was warm and soft as wrinkled flesh. It shivered beneath my palm. I looked up into its canopy and saw an old woman perched on the highest branch, clinging to the trunk. She opened her mouth wide when she saw me, whether to call out or scream I wasn’t sure, and I saw the raw pink ridges of her gums, her wagging tongue. Drool slipped from between her lips like a string of crystal beads.

My fairy escort pointed out the trays of teeth waiting to be planted, the earthy peaks and troughs sprouting seedlings. He took my arm and walked me between ancient plum trees, bowed and aching with fruit. He plucked lemons from waist-high striplings and offered them with a flourish and a leer. I clasped my hands together and walked this living graveyard.

With a tug to my wrist he brought me to a halt beside a sweep of apple trees and lifted my chin. High above me a small girl climbed along a branch and wrapped her thighs around it, hanging upside down. Her T-shirt slithered up to her chin, exposing her grubby vest. She was so much thinner than I ever imagined myself to be. So much paler. Across her face something thread-thin and glistening unravelled, spooling from her mouth like a vein, like an artery. It twisted the length of her body and disappeared into the tree’s warm bark. We stared at each other for a while and then she righted herself and turned away. I called to her to jump down to me, into my arms, but she didn’t respond.

“You were a playful little thing when you lost your first teeth,” the fairy said. “Always inventing games and larking around. Here, drink this. Raise a glass to the memories.” He tried to give me a crystal tumbler rich and thick with apple juice but I kept my lips and fingers knotted together, shook my head. He shrugged and pointed to the next tree. “Less fun by this age and your first proper extraction,” he said. “But we still enjoy the taste of your teenage melodramas.”

My young self kept her back to me, hunched over on a low branch, her ankle swinging inches above my head. She stared at the horizon as if she were alone in the world. I watched her for a moment but she didn’t move. Past her, in the other trees around us, I peered back at myself through vivid green foliage or shifted in sun splashes as I clambered from branch to branch: dead-eyed and drained, tethered by the umbilical thread that strung me to my tree and and fed its roots with my essence.  Every time I’d given them a tooth they’d planted it and taken that version of me. I’d sold myself over and over, for a handful of pennies.

A fairy ambled past, cherry juice slick and scarlet across his smile. He twirled an index finger in the air and hummed tunelessly. “The feller from that tree was an experienced musician by the time we got his wisdom,” my companion said. “They’re the teeth we like best; such big roots. Such complex experiences. There’s so much to taste.”

He cupped his palm across my cheek and my own teeth pulsed in rhythm to his blood surge. I felt them tug in their sockets, straining for him. He circled my flesh with his and smiled. “Life’s flat here for us, without the entertainment you all give us. We’re empty creatures, in essence.”

He spun me into his arms. “Let me bargain with you,” he whispered, breathing heat against my leaping jugular. “Give me three of the four teeth you have left and I will release three of your selves; set them free to rot down into the mulch they could have been if it weren’t for your past greed.  A fair exchange. We’ll chop down three trees but plant just one more.”

We kissed to seal the pact. I felt no pain as his tongue became a knife inside my mouth; I didn’t want it to end. When he released me his grin was wet and crimson. He spat my teeth into a handkerchief, folding the fine linen into a pouch and shaking it so that it rattled. I thought of dice shaken in a fist at the start of a game. I hoped he’d kiss me again but he bowed and called for someone to take me home, strode away without a backward glance.

During that final episode of toothache, after the dentist had sent me home; when the world had thinned to one long howl of agony and the bones of my skull brittled to glass, I finally gave in on the ninth day and let them take what they wanted. The transaction was brief, almost dismissive. Now that they had the thing they’d coveted so much they stopped their seductions.

“What will happen to me now that you have them all?” I asked. “Will my life halt here, when you plant the last tooth there?”

They laughed and shrugged, and threw me a handful of chipped and dirty coins before leaving. “Thank you for the memories,” one of them said as he closed the door.

I curled up on the floor beneath my window, emptied and rootless, and thought of those three versions of myself that I’d freed with the bargain I’d made. I wondered whether they’d screamed when the axe sliced into them, whether they’d flowed back into their roots and faded away into the earth or been thrown from the topmost branches when the tree came down.

I wondered what fruit my final tooth would yield.

Carly Holmes writes stories and occasional poetry by the banks of the river Teifi in west Wales, UK. Her debut novel The Scrapbook (Parthian) was shortlisted for the International Rubery Book Award in 2015. Her short prose has been published or is forthcoming in a number of anthologies and journals such as Ambit, The Lonely Crowd, A Fiction Map of Wales, and The Ghastling. In 2016 Carly won First Place in the Allingham Festival short story competition.

Carly is co-editor of The Lampeter Review, a journal affiliated to the university where she obtained her PhD.