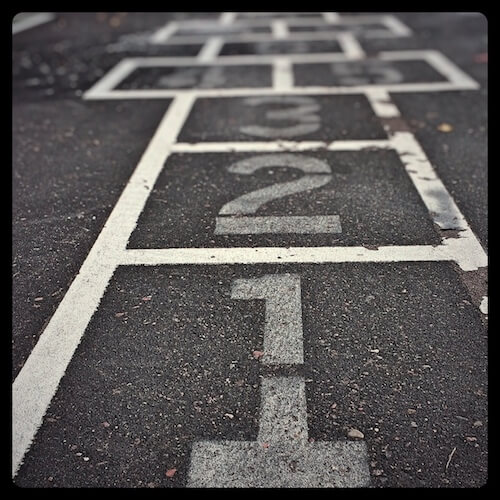 Celia and the others drift across the playground to the school’s steps, gathering like birds. All of them waiting, eyes closed and lips parted in anticipation, their shade-bodies sliding through each other’s, tangling like mist as they arrange themselves.

A ringing begins and the building comes alive: heartbeat of footsteps, breath of swinging doors. They ready themselves as the main doors burst open, releasing a thousand small bodies into the world. The children race down the steps, bursting unheeded through Celia’s gossamer belly and thighs; they run through the line of ghosts and she and the others groan and tremble at the flashes of bright heat.

At the far end of the playground the parents wait, readying tissues and snacks and scoldings and joy. Celia and the others follow the children, reaching out as the parents do, for were they not parents once? Oh to feel those hugging arms, those sweet kisses! But their hands slide through the children, leaving wispy trails clinging to tiny nostrils and mouths.

The others drift among the throng, but Celia looks. She looks for a particular dark-headed girl, with a knotty ponytail and paint-spattered hands. My girl, she says when she sees her. She wades through the sea of children, reaching. My Jessica. They are walking away, Jessica and a woman, and Celia hurries, trying to touch her, trying to make her see—

But then Celia reaches the boundary and her outstretched hands dissolve into fog, she is fog, nothing but mist and hope and desire pacing the confines of her haunting.

My girl. Oh to feel that hand in hers, to gaze into those large brown eyes!

It’s enough to make a person die from longing.

Each day the children fill the playground, the air crackling with their energy. Celia and the other ghosts run and play with them, cutting in front of the children to feel the rush of their bodies, bending over small bowed heads to add their own whispered secrets. They brush translucent hands over bleeding scrapes and try helplessly to catch tumbling bodies.

Celia stays close to Jessica. Jessica doesn’t like to run; she likes to build things with the twigs and leaves that fall into the playground. Celia leans in close and whispers my special girl and Jessica smiles and it warms Celia like the sun once did.

A teacher appears, holding out his hand, and Jessica goes to him. Celia follows, uneasy, for isn’t this the playground time? Up the steps and through the doors: the iciness of glass, the bite of metal. Celia follows them down the hall, past the other ghosts who watch in the classrooms, past the others who weep silently in the classrooms and sing along silently in the classrooms. Just as she reaches the front entrance she feels her boundary begin and can only watch as the teacher hands Jessica over to the woman, who kisses Jessica and zips up her coat. “We’re just going up there to look,” the woman says to the teacher. “We haven’t decided anything yet, but it’s a big opportunity, a chance to raise her in a city.” And she leads Jessica away as Celia flails at the boundary, kicking and thrashing and silently crying out as they walk away, as they always walk away.

All through the long nights Celia and the others drift. The bite of metal, the crackling of trees, the echoing heat of the classrooms. One of the ghosts stands in the moonlit playground and silently wails; always when the moon is high he does this.

The bell rings and the children come forth and to a one Celia and the others groan and sigh, though Celia is looking for a knotty ponytail and paint-spattered hands. My girl. She finds her in a group of children and parents and her girl is weeping, why is she weeping?

The woman says, “It’s such an opportunity, and you only live once.” She holds out her hand and says, “Don’t cry, Shari. You’ll see them again.”

Jessica takes the woman’s hand and Celia rushes in front of them, crying she’s not Shari she’s Jessica. The woman pushes through Celia and she flinches at this bigger body, its weight and murk, she stumbles and tries again to stop them. Jessica! That dark, knotty ponytail, the smears of paint on plump little hands. Jessica! Her translucent hands running through that dark bobbing ponytail like mist.

Celia pauses, confused, shaking her head as if to clear something from it.

You’re lucky to be alive, they tell her, their voices muffled by the ambulance engine. Can you tell us what happened? Were you distracted?

Celia blinks and she’s not in the playground anymore, she’s in Jessica’s bedroom, everything dark and hollow. She can’t see, she can’t see or feel the boundaries anymore—

the darkness growing, looming, eating up the room and the house, sucking icily at Celia’s hands and feet, and beyond it is a warm terrifying nothing—

Celia backs away from the nothing and then she runs, fleeing back to the playground where Jessica will turn around, she’ll place her small warm hand in Celia’s and her brown eyes will focus on Celia’s face and she’ll see Celia at last, she’ll see.

At the steps the ghosts gather like birds, lips parted in anticipation. The bell rings and there is brightness and heat and life, they groan from the rush of it. Celia follows the children, looking for a dark-headed girl with a knotty ponytail and paint-spattered hands. Jessica, she says when she sees her. My girl, my girl. Already Jessica is running into a man’s arms; Celia hurries, trying to reach her, trying to touch her, trying to make her see.

L.S. Johnson was born in New York and now lives in Northern California, where she feeds her cats by writing book indexes. Her stories have appeared or are forthcoming in Strange Horizons, Interzone, Long Hidden, Year’s Best Weird Fiction, and other venues. Her first collection, Vacui Magia: Stories, is now available. Currently she’s working on a fantasy trilogy set in 18th century Europe.