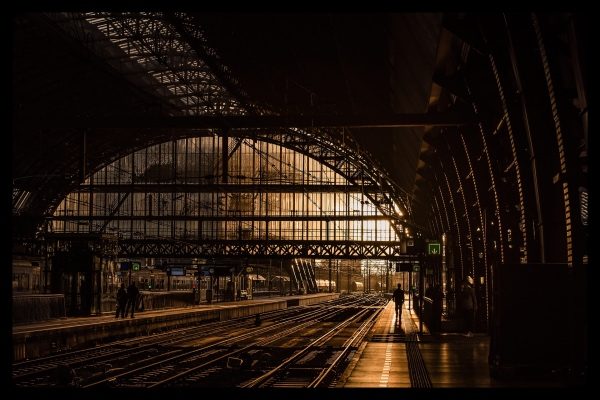 Mustafa had been a conductor since the Occidental Railway launched. Or ended. Timing was difficult to pin down with life unfolding in reverse.

The line’s anomalies weren’t revealed in the interview. Perhaps Petr in HR was unaware. The job description promised short trips, a dream come true after a lifetime of traversing two continents. Compared to the week long journeys of yesteryear, the afternoon jaunt from Hamburg to Vienna felt like retirement.

At first, Mustafa thought working fewer hours had birthed his newfound energy. He credited less time on his feet for the increased vigor of his legs. But when the cataracts that clouded his eyes for more than a decade began to dissipate, a suspicion that had seeded itself on the edges of his mind sprouted to full size.

The first day he saw clearly would have been his fiftieth wedding anniversary. What would Nadia have had to say about the cragged face gazing from his mirror – she who vanished from this earth before her olive cheeks could wither and sag? He imagined, had life not defeated her, she would tweak his chin with bony fingers and laugh, not the silver peels that raced his heart in youth, but the contented chuckle of shared experience that he had still not forgiven her for denying him.

Mustafa had a memory for faces, and he latched onto the rare customers who traveled his route a second time, or even a third, searching for signs they shared his peculiar fate. He punched their tickets for Budapest or Brno, but saw no signs they were regaining their youth.

His crew, however, was a different matter. Their years appeared to also be rolling back, but when broached, his colleagues denied the increasing smoothness of their skin. He cursed their refusal to dissect their rejuvenation, never one with much tolerance for those who refused to question.

As his arthritic frame loosened, Mustafa reacquainted himself with cities he’d inhabited in years past. He didn’t comprehend the rules of his new timeline, but hoped its tenets had transferred Nadia from dust to life. With his body in its middle years again, surely she would recognize him.

He knew he was grasping at straws, that by his best understanding the time phenomenon was limited to those who worked the rails of Occidental. Still, he sought out the sorts of cafés and bookstores Nadia loved, lingering over the types of architecture books with which she’d stoked her dream of a cottage and garden. He wandered Berlin, searching for the walk-up apartment of their salad days. A florist hawked peonies from a cart. It had been so long since he’d see those blooms that he bought a bouquet on impulse. They were Nadia’s favorites. Surely their availability was a good omen. He thrust the petals to his nose. Memory ricocheted through his every sense, as if it had been yesterday that he first saw a lock of her smooth black hair slip out from beneath her turquoise head scarf.

Confused by a shopping center he didn’t remember, Mustafa circled back, certain he was on the right block. He found the Odeon and remembered Nadia pilfering coins from café sofas to obtain the price of admission, monies they should have spent on food but instead plunked down for the chance to hold hands and escape the everyday darkness they lived their lives in.  From this landmark, it was easy to trace the steps to their first home.

The beloved stone façade had been replaced by something uninspired. Gone was the stoop where Nadia escaped the heat of their sweltering chambre de bonne.  Instead, fries were hawked through a sliding glass window, and the smell of grease was a slap.

He resigned himself that his reversal existed in the tunnel that was his line on Occidental; time had not inverted across the board. Nadia had not returned, nor would she. This realization pained him as acutely as her death had when his life still moved forward.

The following day, he requested a transfer.

The new route stretched from Paris to Milan. He hoped life progressed in the normal order here. He’d reached a phase where aging was difficult to discern, regardless of which direction it was moving in. His new crew was at a similar age, their faces refusing to confirm if they were growing older or unraveling in reverse.

At times he wondered what did it matter if he was growing younger? How was that worse than growing old? It was the uncertainty that unsettled him, not knowing what to expect. What would happen as his body retreated further into youth, and then infancy? Would Paradise greet him on the other side, as it would in death, or would he simply cease to be, withdrawing into an era where no one, not even God, had thought him into existence? There was a time when Mustafa had looked forward to lying in his grave, resting until the Day of Standing Up when he would reunite with Nadia. What great sin of his had he committed to jeopardize this?

Mustafa quit the railroad the day his beard faded to wisps. Why hadn’t it occurred to him sooner that quitting might stop the process?

When acne sprouted across his forehead, he knew it was futile. He confined his life to a single room in a residential hotel with a shared bathroom down the hall. He spent liberally on self-medication, freely indulging in the liquor his religion forbade. Worry laced his thoughts. Who would care for him when he was young, when his fingers undeveloped to the point where he could no longer clothe himself or lift a spoon to his lips? He’d seen the cruelty people were capable of inflicting on the helpless, and who was more vulnerable, more invisible, than a parentless child?

To date, his intellect had not diminished. Or so he thought. Perhaps that was simply youthful naiveté. His memories of Nadia, however, had lost their crisp edges, as if from frequent handling. But who was to say that was caused specifically by aging, either forward or in reverse, and not merely the overall passage of time?

It would be better, of course, if his wits dimmed as his body recoiled into infancy. What greater horror than to be of sound mind but with lips and tongue unsuitable for speech? To be aware of the neglect the world inflicted on him, but powerless to halt it?

He acquired a gun to bring death while there was still time for him to effect his own sad end.

As he sat at his wobbly desk, his one photo of Nadia propped against the lamp, he could not bring himself to load the bullets. How could he condemn another human to such a gruesome find? Firsthand, he knew that shock, and had not yet quite absolved Nadia for her own similar betrayal. He was not of the minority in his religion who believed a suicide could still attain the afterlife.

He decided to wait for what God had in mind. If it were God’s wish to slowly shrink him out of life, so be it. He cradled Nadia’s photo in his palms, determined to enjoy what little he had left of her. With his thumbs, he wiped tears from her face as if they were her own.

Georgene Smith Goodin’s work has appeared in numerous publications, and has won the “Mash Stories” flash fiction competition. She lives in Los Angeles with her husband, the cartoonist Robert Goodin. Their personal menagerie includes two dogs, Toaster and Idget, and a turtle named Tubby. When not writing, she is restoring a 1909 Craftsman bungalow with obsessive attention to historic detail. Visit her blog, (http://georgenesmithgoodin.blogspot.com/) or follow her on Twitter, @gsmithgoodin.