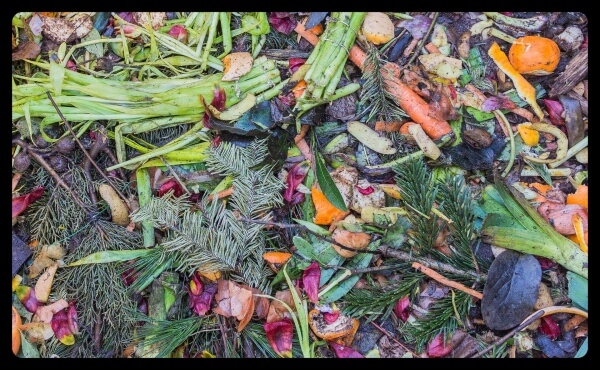 Like most of John’s projects, the compost bin became mine to maintain almost as soon as he started it.

I put a bucket on the counter and filled it with acceptable scraps. Coffee was a good source of nitrogen. Depending on what blog I read, citrus was iffy.  Meat? A definite no-no.

Not long after we used the first batch, squash and melon popped up all over. Seeds, it seemed, don’t readily break down.

I was making pancakes when John decided to compost his fingernails.

“Gross,” I said, when he brought me those tiny quarter moons, and hastily formed a belief that only food waste should fertilize food.

“You don’t think they’re gross when they do this.” He ran his fingers down my back seductively.

“They’re still attached to you.”

Ever the instigator, John put toenail clippings into the bin next. Q-tips burdened with gobs of yellow ear wax followed. Then Kleenex. Locks of hair. Beard trimmings.

I thought it was a mushroom at first. It sprang up near the onions, pale and rounded. But as it grew bigger, I realized its shape was all wrong. Close inspection revealed that it was definitely, unmistakably, a toe.

“I’ve been cloned,” John said when I showed it to him.

He poked it with a stick and it twitched. “Wow, it can feel.”

“Do you think if we water and fertilize it, it’ll become a whole foot?”

“Time will tell,” I said with a shrug, and went to fetch the watering can.

The fingers came up next, scattered around the tomatoes and the eggplants. They seemed to have an affinity for nightshades. There were twenty-three of them in total, six of which appeared to be thumbs.

The hair and the beard trimmings were hard to spot. John’s a brunette, so they blended in well with the soil.

We got a crop of four noses, and eleven ears. I’d be lying if I said I didn’t think of Blue Velvet when the first ear came up, and the whole thing started to seem pretty dark. But I didn’t want to weed them out. They came from John after all, and weeding somehow seemed like murder.

I dug a bed back by the fence and carefully transplanted the parts. Veins and nerves hung where the roots should have been.

The fingers curled around mine as I coaxed them into the trowel. It surprised me how familiar their rough, dry tips felt. I remembered the first time John held my hand, at that movie theater by the beach, and I held onto those freshly-grown fingers a little longer than I should have, remembering what it was like to be newly in love.

I arranged the parts in their new home as if they were an actual body; hair at the top, toes at the base. I planted the ears like a series of parentheses inside of parentheses, with one on the right unmatched by one on the left; I made six incomplete hands with the fingers.

I was canning tomatoes when the officer knocked on the door. I smiled, hoping he didn’t want to go into the garden.

Or perhaps our crop was the reason he’d come. Had a neighbor peeked over the fence? What else could it be?

I didn’t understand when he mentioned a furniture truck. He had to say it lost control three times before I sunk to my knees, comprehending.

They wouldn’t let me see the body. It was too badly damaged. I told the coroner about the tattoo on John’s left arm. He’d gotten a lamb because he’d mixed up his nursery rhymes. When I’d pointed that out, he’d said, “Oh, Mary, Mary, Quite Contrary, always living up to your name.”

The coroner confirmed the tattoo. A clerk gave me John’s wallet and wedding ring.

I asked about a green burial, but the mortician said it was illegal to compost a corpse.

Through the funeral, I remained stoic; Grandma would have been proud of my stiff upper lip. I endured endless guests at the reception afterwards, and gladly closed the front door when the last one left.

The full moon reflected off the path as I made my way back to the fence. I lay among the body parts, my hair entwined with John’s. The fingers were cool against my palm, and I couldn’t help noticing the nails were getting long. I wondered if I should trim them in the morning or let them go to seed.

“How Does Your Garden Grow?” originally appeared March 2016 Zetetic: A Record of Unusual Inquiry.

Georgene Smith Goodin’s work has appeared in numerous publications, and has won the “Mash Stories” flash fiction competition. She lives in Los Angeles with her husband, the cartoonist Robert Goodin. Their personal menagerie includes two dogs, Toaster and Idget, and a turtle named Tubby. When not writing, she is restoring a 1909 Craftsman bungalow with obsessive attention to historic detail. Visit her blog, (http://georgenesmithgoodin.blogspot.com/) or follow her on Twitter, @gsmithgoodin.