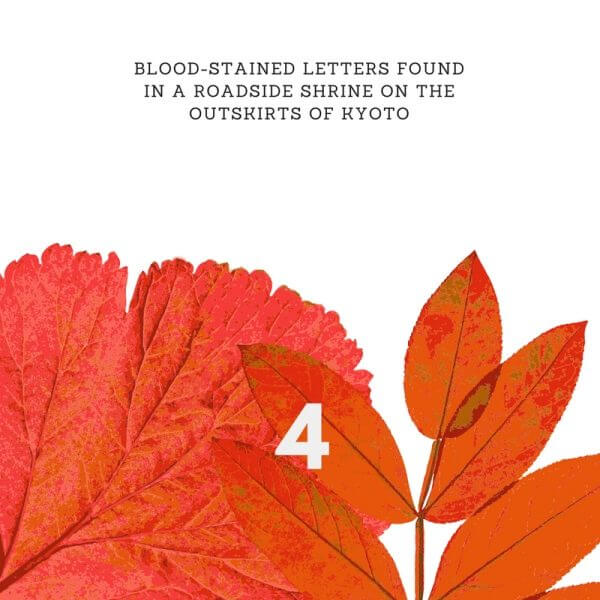 I must apologize for the lengthy break in our correspondence prior to this letter.  With the death of Councilman Yamazaki under such bloody circumstances, I felt it best to avoid attracting notice for a while.

However, I have not been idle after Yamazaki’s passing.  Indeed, I have learned of an even graver danger to all of us who are not human and who call this place our home.  Mere tanuki that I am, I have nonetheless taken upon myself the task of ending this threat— if, that is, you would deign to help me once again.

Have you heard, I wonder, of a certain popular essayist named Ishida?  His works have never been friendly to Yamazaki’s efforts on the council, and yet I have found that he as well is fully aware of this hidden world through which we move.  Worse, he too is a hunter— though I could not learn whether he hunts out of avarice or if he nurses some unspoken need for vengeance.

This morning, after Ishida had left his home at the usual time, I took human form and let myself in through his kitchen door with ridiculous ease.  Secreted away in his under-floor storage area were trophies that made me shudder.

Here, in brief, is what I found:

This last find, in particular, set terror coursing through me.  Was Ishida, I wondered, the hunter who had killed my family in our den, all those years ago?  I must confess I sat there in the dimness of his storage area for far too long, paralyzed with memories.  It was only a memory of you, Madam— of your warm breath gentle on the nape of my neck days later as I wandered, lost and alone through the forest— that brought me back to myself.  That allowed me to renew my dedication to our mission.

I know that, after the prominence of Yamazaki’s death, you too will be reluctant to draw attention to yourself.  But is it not you, Madam, who has taught me the importance of striking before we are struck?  Always, through the years you have cared for me, you have taught me to shed the terror of my youthful trauma. It is only through your love and benevolence that I have gained the strength to enact vengeance against those who would harm innocent creatures like ourselves.

I implore you, Madam: aid me once again in making the city safer for our kind.

I remain, as ever, your loyal servant,

Our friend the essayist left home this morning in the company of a woman who reminded me somewhat of you.  She had vulpine features and long, reddish hair, and wore the most resplendent silk kimono I have ever seen.  Our friend, as well, was more finely dressed than his usual threadbare kimono, wearing instead a finely-cut Western-style suit of black-and-grey.  As they walked away, he laughed and took her by the arm as tenderly as though she was his newly-wedded wife.

Astonished as I was by his sudden change in company and behavior, I did not let it distract me from my purpose.  I snuck once more into his kitchen, intent on retrieving the remains in his possession and giving them a proper burial.

But it seems, alas, that our friend has been cleaning house. The under-floor storage area was as deserted as my childhood den; the only thing I found was a single page from the Night Parade, crumpled in a ball in one corner.  When I smoothed it out, I found that it was the entry for fox.  Our friend must have been in a terrible hurry to remove it from his book, as the poor beast’s picture was torn quite in half— its head was missing entirely.

All the same, I grow uneasy.  What would you have me do?

I was most distressed to hear that the woman in the last letter matches your sister’s appearance.  So distressed, indeed, that I could not wait for morning to investigate:  I crept into our mutual friend’s home while he was sleeping and breathed powdered leaves into his eyes to ensure he would not wake.

I will not prevaricate: Your sister is dead.  I found her skin stretched out on a rack in our friend’s back room, her tails brushed to a glimmering sheen.

And that is not the worst of it.  In checking the under-floor storage area, I discovered the following:

I am sorry for your loss, Madam, but we have no time to mourn.  We must act, lest these atrocities continue.

At the same time, we cannot risk another violent and bloody death like Yamazaki’s.  I beg of you, allow me to use my knowledge of Ishida’s habits in working out a subtler plan of attack.  I will provide details in my next letter, which I will place in this shrine tomorrow evening just before sunset.

Yours in sympathy and hopes of justice,

I will start this letter with a question: Do you remember, five years ago, when you pulled me from my family’s den?  A vicious human hunter had murdered the rest of my littermates— along with my parents— and I alone survived.

That, at least, is what you told me, and I had no reason to doubt you.  You fed me, cared for me, taught me to survive in the forest and the city both.  And if you focused overly much on the killing of hunters, I did not think it strange.  It was only a year ago, when we first turned our focus onto Yamazaki, that I began to suspect you were lying.

Yamazaki, more so than any of the other hunters we had hunted, was obsessed with neatness.  His trophies were whole, his collection impeccably ordered, and the sites where he enacted his murders were mostly untouched.  And yet, my earliest memories consist of wanton slaughter, of blood and gore in every corner in the den I had called home.

But even if I doubted, there was nothing I could prove, and even if they had not killed my parents they were hunters all the same.  And then, just after Yamazaki’s death, Ishida drew me in and captured me.  I feared the worst, but much to my surprise he did not harm me.  Instead, he fed me, cleaned my wounds, and brought to bear upon me all the reasoning he wields so well in his essays.

Do not mistake me:  He did not deny his occasional hunts. But he insisted that he hunted only to protect those creatures— human or otherwise— who could not protect themselves from those creatures who would harm them.  Creatures like foxes, he told me, who often kill food they cannot eat, just for the joy of it.  Who can be seen dancing in the forest after their meals, coated in the blood of the dead, giddy with slaughter.  He had been watching a fox for some time now, he said, and could show me the proof of it.

Yes, Madam.  Your own sister was the one who convinced me to betray you.  We tracked her to the den of a family of weasels, where I witnessed for myself the blood, the chunks of matted fur which lay about the place as though storm-scattered.  Thus it was I came to learn that you had killed my family.  Thus it was that I learned, at last, how I would enact my revenge.

Do not try to flee after reading these words; I am afraid it is far too late.  Already Ishida must be sneaking up behind you, garrote and dagger at the ready.

Goodbye, Madam, and may my poor departed siblings earn some measure of peace from your passing— a passing that I pray will be long and painful, and as bloody as that which met Councilman Yamazaki not so long ago.

Stewart C Baker is an academic librarian, speculative fiction writer, and occasional haikuist. His fiction has appeared in Writers of the Future, Nature, Galaxy’s Edge, and Flash Fiction Online, among other places. Stewart was born in England, has lived in South Carolina, Japan, and California (in that order), and currently resides in Oregon with his family­­—although if anyone asks, he’ll usually say he’s from the Internet.