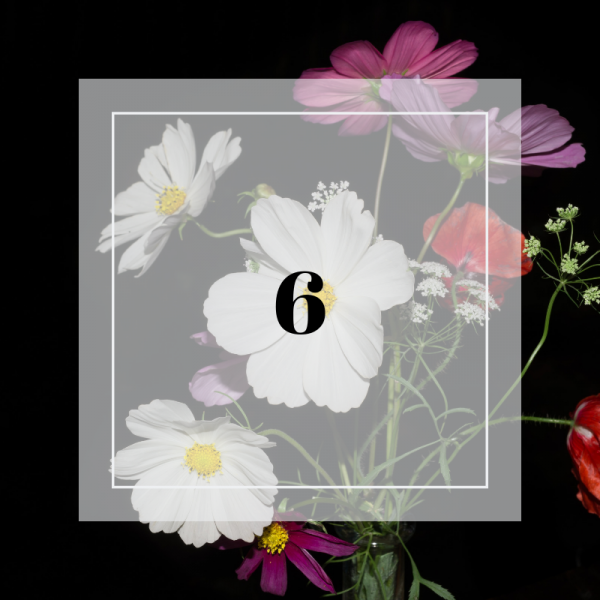 She prowls the edge of Simon’s bookcase, brushing her fingers along the specimens on the shelves. The softly lit bones remind her of seashells, smooth and white, silky under her touch. Small animal skulls with teeth sharp enough to pierce skin; a larger one with twisting horns, the kind you might stumble upon in the desert as you’re running out of water; singular bones; a glass jar of teeth.

The rest of the apartment is dark. She glances at Simon’s lean silhouette by the window. The sun is setting behind him, swallowing the city. “Any of these human?”

Camille laughs. The bones are silent.

They fill her with a strange longing. She wishes her bones, too, were beautiful like them. But the bones in her shoulder bloom like coral, growing with a plan of their own. They want her to die.

Simon hugs her from behind. Sunlike warmth floods her. He whispers in her ear. “Can I draw you?”

Only then does she notice the sketches on the far wall: skulls and flowers, bones and fruit. The grapes and oranges make her mouth water. She can see he has talent—everything looks equally lifelike. She nods. “Okay.”

She sits on the edge of the bed, smoothes her long hair, and looks to Simon for instructions. Her fingers rest on the buttons of her lavender cardigan, asking, should I take it off? She turns her head, offering, this way or this? She arranges her hands on her lap—

Simon raises his hand, grinning. “Anyway you like, but please stay still.”

She tells herself to relax, to be Camille. But which one? There are multiple versions—healthy and sick, before and now, here and not here. Sometimes none of them feel real.

A quiet pain echoes in her shoulder. She resists the urge to touch it, reminds herself there’s no way it looks any different than this morning in front of the bathroom mirror. He won’t notice, not today. She unbuttons her cardigan but leaves it on.

While he draws her, she watches him. Sometimes their eyes meet.

Simon’s sitting on the floor, cross-legged, sleeves rolled up, a large drawing pad balanced on his knee. Sunbeams and elongated shadows sweep the floorboards around him. Every now and then, he brushes dark curls away from his eyes. While he draws, his face looks different somehow. More open, almost divine. He’s the one who should be immortalised.

Simon puts down his pencil. “That’s enough for today.”

Sitting beside her, he hands her the drawing.

Camille lets out a small, high-pitched noise. He has drawn her, but with the outline of a skull on top of her face, her eyes staring through the sockets, and with her bones transposed over her skin and clothes. A portrait of a skeleton with the suggestion of a girl around it.

She inhales sharply. “Why would you draw me like this?”

Simon’s voice is calm, tender. Unlike hers. He asks, “Is it not you?”

She can’t stop staring at the girl and her bones, the bones and their girl. The bones that want to kill her.

She’s about to toss the portrait to the floor when she notices two jagged lines across the skeletal wrist. Her voice is small, careful. She points at the picture. “What are those?”

“An accident when you were young. You were crossing the street when a car hit you.”

Camille remembers the lightning-sharp pain, the howling from her throat on the way to the hospital, the cast she had to wear while her fractures healed. Six weeks to heal seemed like forever back then.

She touches a dark spiderweb along the ribs. “What about this?”

“You fell off a bucking horse. You were so determined to get back up, the EMTs pretty much had to drag you to the ambulance.”

Her hands shake and the picture with them. There’s more: A dark shadow across the shoulder, spreading into the collarbone. Just like the scans on the wall in her doctor’s office. “And this?”

He takes the drawing pad from her limp hands and gently puts it down. “You know what it is.”

Of course, she does, of course. The thing that won’t stop growing, the thing she can’t forget, apparently no longer even with him, and that if anything makes her mad. That’s why she didn’t tell him.

Her voice cracks. “How do you know?”

“Your bones told me.”

“What else did they tell you?”

Camille turns to him. Her voice is soft, needful. “Tell me.”

Taking her hand into his, Simon closes his eyes and kisses the base of her thumb. “Trapezium.” His lips are warm, soft. They move onto her wrist. “Ulna. Radius.”

Camille lies down on the mattress. “All of them.”

He doesn’t undress her, only peels enough cloth to reach the skin. His divine mouth seals every bone of her body, all two-hundred and twenty-six. “Tibia. Fibula. Femur. Ilium.” He slides the cardigan off her shoulder. The kiss that follows lasts a good minute. “Acromion.” His voice has changed. When he touches her collarbone, she trembles, but neither from joy nor pain. “Clavicle.”

The dew rising in her vision blurs out the blades of the ceiling fan, his expression, the light from the bookcase. “I bet you can’t wait to have me on your shelves.”

Simon shakes his head. “I’d build you a museum.”

A tired laugh escapes her lips. “Now that you have their attention, perhaps you can tell them to behave.”

“I think I just did. They say they’re trying. The thing with bones is most of their communication is silent. Gestures, movement, pain. You have to talk to them gently, listen carefully to hear what they want.” He presses an ear to her chest, just left of her sternum, breastbone. “Hear that?”

Camille closes her eyes. Her chest rises and falls like the ocean. “That’s my heart.”

“Your bones hear it, too. And they love the sound.”

Sylvia Heike is a speculative fiction writer from Finland who likes nature, photography, and birds. Her fiction has appeared in Gamut, Luna Station Quarterly, and freeze frame fiction, among other places. You can find her on Twitter or her website.