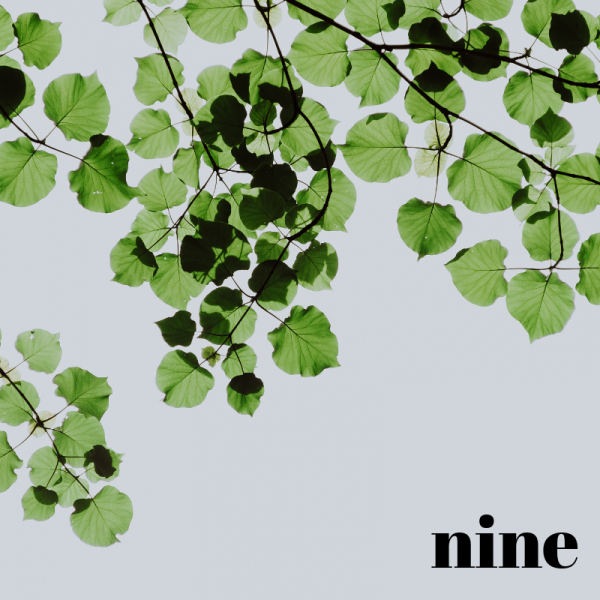 I live down in the pockets of the deep woods, where the crickets sing at dusk. This is where I’ve lived for a long time. A long, long time. Time in these mountains is a capricious master, sometimes shredding days like wheat fields under a scythe, sometimes keeping single hours captive like a gnat in amber. I’ve been holding on to this hour by my fingernails for years.

It’s sunset—I can’t remember when it wasn’t—and the sky is all citrus-marmalade swirls and twinkling violet lights. I catch glimpses of both when I look up through the high, swaying branches of bare-limbed hemlock, ash, and oak, creaking like a canopy of knobby bones above me. Spring is late this year. The buds on those old trees are taking their own sweet time with blossoming.

I’m perched on the smooth face of an ugly hump of rock, which juts out from the mountain like the sun-dried rib bone of a dead sperm whale. The rock was carved up from the heart of the mountain by retreating glaciers, thousands and thousands of years ago. Part of me—part of all of us—was carved up around the same time, though from stranger stuff than rock and clay. But I spin carbon around me in this place to resemble the young girl with dark brown hair and unmarked hands that I remember glimpsing in glass windows.

I’ve long decided that this skin suits me best.
Oh, there’s a chill in the air tonight and this pose I’m holding threatens to freeze me solid. The breeze has been skimming the snow paths down the mountains. Ice is still clinging to the underside of young mushrooms and brown-spotted ferns. The cold has me wrapped in second-skin layers of frost that I can’t shake off without moving. And I won’t.
Not until I know he’s gone. Not until I know it’s safe.

I’ve been alone. I can’t tell you how long. The gasping half-words of my sister, Anya, as she lay dying in the birch wood—that was the last time I heard a voice that wasn’t my own. Other than his, of course.
These old woods are a crossroads for more worlds than there are stars in the sky. My sister and I weren’t the only ones to fall into them by mistake. There were once thousands of others here, some we knew and some we didn’t, some who were kind and some who were cruel, a myriad of being. But he murdered them all—water dancers, sea spinners, sky terrors, and even the terribly ordinary—bending down over each one of their warm corpses, peeling back the slippery, silvery skin by the roots. He wants our skin, he needs our skin.

His own is fraying at the seams; there are holes where his heart should be.

I watched him wrap my sister’s skin round and round a drop spindle and then slip it in the patchwork bag slung over his hunched and crooked back.

Free from its skin, Anya’s soul immediately splintered into ten thousand fragments, like a star bursting into pieces. Some fled like wisps of smoke up into the rafters of the forest, then further into the cold blue sky, up and out of sight. Some dripped into the dirt like oil—a living oil that wet the dry beds of autumn-killed violets. Renewed, the flowers suddenly stood up and bloomed. One fragment lodged in the green wing of a moth that flew into my hair and stayed there, whispering many bittersweet things about a warm country, a crowded city, painted elephants, and wooden carts filled with peaches, grapes, and melons.
That day, I hid in the birch wood, buried in the mud and roots of a tangled old beech tree, and waited for him to leave. He searched for seven years, until the spidery lime moss in his coarse black beard had grown down to his waist.

I didn’t make a sound. Not one. He knew I was there, sure. But the old man couldn’t find me.

“You’re the last one, Maaike,” he snarled to the hollow spaces in the birch wood. I couldn’t see him but I heard the confident half-smirk in his voice as he continued, “You can’t hide forever. You won’t want to. There’s no escape and there’s no one left but the two of us. I’ve come too far to turn back. Do you understand? These woods will strangle you in silence. You’ll be begging me to take you someday, if only to save you from the loneliness nibbling away at the skin beneath your fingernails.”

I didn’t stir, I didn’t swallow. I stayed quiet until I was sure he was gone, until I could no longer feel his hot breath against the hard bark of the beech tree, or feel the pressure of his feet planted on the earthen floorboards above my head.

When he was gone, I climbed out of the roots of that tangled old beech tree and stretched once, to work out the kinks of several years staying very silent in one place. With a shiver, I ran off into the deep woods.

Down around the other side of the mountain, there’s a small marshland ringed by long weeds and raggedy red thorns. The crows like it. I’ve often seen one perched with his strong grip on the edge of those flat limestone rocks that poke out of black water. He stretches his wings. He bobs his head up and down and makes a guttural sound in the back of his throat, which a cricket in a patch of bright mint grass will quickly answer, even though this will let the crow know where she’s hiding.

I think she wants him to know.

Anya and I would watch the crows for hours. We would sit side by side on the marsh grass, backs together, our fingers reaching down toward the water to skim its surface. The water in the marsh stays so still. Even during heavy rainstorms, the droplets from the cinder sky above pierce the glassy surface of the pond with little violence.

It sits like a mirror. Just like the mirror we laid on the kitchen floor of our mother’s house one day when we were alone, waiting out a summer heat storm. We found the mirror in the attic. The glass flickered when light fell on it, like reflections down a deep well of cold water.

We were children. We both saw the tangle of old woods, brambles, and briars at the bottom of that well. We both knew that we’d disturbed the universe, with the child-like clumsiness of spilled wine on white silk. We tumbled through the mirror with the ease of shadows, down and drowning, coming up for a gasping lungful of air at that old crow’s pond, breaking the stillness of the water and the face of the mirror on our mother’s kitchen floor in the process.

He saw us emerge. He’d been standing in a copse of willows and hollow reeds, bent and frowning, counting the number of drop spindles in his bag and muttering, always muttering, “It’s not enough.”

He looked up from his bag. He watched Anya raise her palm, studying the latticed tattoos there with wonder. I didn’t bother looking at my hands. Rubbing the fingers on my left hand together, I knew that the marks on our hands were not written in ink. We’d exchanged one skin for another.  As for what the marks said or meant, I could guess that well enough. They said we weren’t going home again.

The old man in the reeds stared at us. At our skin, so new, so smooth. His face was weathered, peeling, as if sewn together with hand-me-down threads. His expression was hollow and hungry. Frightened, Anya looked away. But I stared back.

My sister called him Berstuk and used to say it with fear. I don’t know if that’s his real name. I don’t know if he has one. But I know other things about him. I know he will bend down and scratch a fox kit between its velvet ears. I know he avoids looking into pools of standing water and grimaces each time he catches sight of his own reflection.

I know he is vengeful and has old wounds that won’t heal. I know he misses someone. Doesn’t everybody? But I know he’s afraid of what will happen if his skin fails and his soul splinters away. I know he uses our skin to patch his own and that it’s never enough.

He’s older than I am. Much older. I know he won’t give up this hunt, no matter how many years pass. He chases me from one end of the forest to the other, year after year after year, from the spindly young ash wood to the mossy undergrowth of the black-mouthed caves under the mountain. Without the hunt, I think he would sit on the mountain until the wind wore him down to dust, still clutching the patches of skin around him.
He’ll get me in the end. He swears it. And perhaps he will. And then my soul will splinter like Anya’s, like all those before her, and blast and bleed away to who knows where. Part of me is curious, but part of me is no braver than he is.

I’ll sit here awhile longer. He will tire soon and climb up to the rocky tundra of the mountain top. He likes to watch the night from high perches, like a gargoyle sitting up on his haunches. I think the night sky reminds him of his own skin, poked through with too many holes of starlight.
If he thinks I’ll show myself before he’s gone, he’s mistaken. I’ve counted all the white and black hairs in his mossy beard, and I know by the lift of his foot which path he will strike up next. Brave or not, I know why the cricket answers the crow.

I’ve tasted the skin beneath my fingernails and, with him standing two feet from me in this little hamlet, it’s anything but lonely.

Gretchen Tessmer is a writer/attorney based in the U.S./Canadian borderlands of Northern New York. She writes both poetry and short fiction, with work appearing in Nature, Strange Horizons and F&SF, among other venues. For updates on her latest projects/publications, follow her on Twitter.