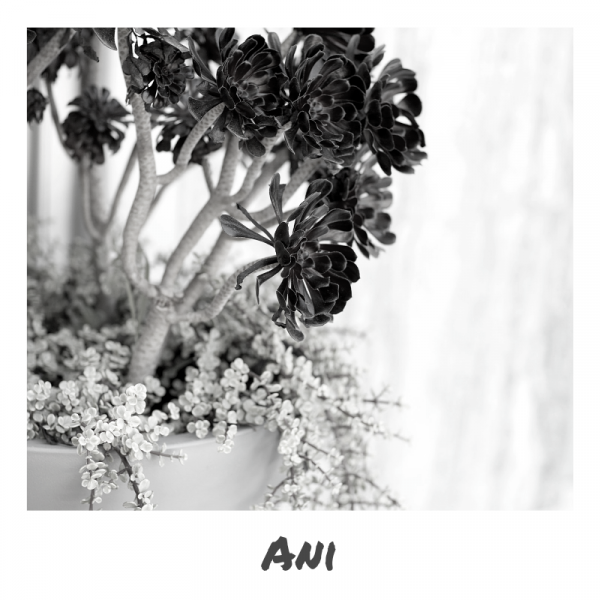 Ani King is the Editor in Chief and founder of Syntax & Salt Magazine. Her work has appeared in numerous publications including Strange Horizons, Penny Magazine, and Every Day Fiction. You can find her at thebittenlip.com and on Twitter. I Give it Six Months originally appeared in Jersey Devil Press, May 2016.

Thing is, you can’t trust the king of the underworld, not with her blue-black hair, and her blue-black eyelashes, and the way her pale triceps pop when she sheds her battered jacket to reveal a thin white tank top and all manner of mismatched tattoos. Mermaids, hellhounds, dragons, anchors; you name it, it’s inked into a calf or forearm or thigh. You especially cannot trust the king of the underworld if you are a pretty woman in a bar who happens to resemble Hades’s ex-old lady, Persephone herself.

On this occasion, it was fair to say that if a girl could be Persephonic, then the Southern blonde certainly fit the description: abundant breasts with fig-colored nipples, soft arms and heavy thighs. Her lips looked pomegranate-stained and lush.

So of course Hades slicked her dark, wavy hair back and adjusted her sunglasses, and leaned over the pool table so her shoulders cut square and wide. She said, Baby, I think I’m in love, and the Southern blonde laughed at her. No, really, I am; just tell me your name, darlin’, the king of the underworld drawled, and anyone else might think they were being made fun of, but that drawl turned into a purr turned into a kiss turned into a tangle of limbs in the Southern blonde’s head.

Maybe the Southern blonde knew she should be careful the moment she laid eyes on the king of the underworld, but she still accepted a beer, and then another, and then a few more, and stood giggling at jokes that were too old to be funny.

What animal walks on four feet in the morning, two at noon, and three in the evening? She didn’t say, hey man, everyone knows that, she just wound her curls around a finger and waited for the punchline.

If there’s one thing the king of the underworld had going for her, it was that bad girl business that good girls like so much, and it hadn’t been but a minute before she pulled a poem out of the air and ran it over the Southern blonde’s plump bottom lip.

Don’t make any noise on the stairs, and you can come home with me, the Southern blonde said, fixing her lipstick and rubbing the smudges of black eyeliner at the corners of her big blue eyes. I don’t want you to wake my mama up, she said, and the king of the underworld could see the Southern blonde probably wasn’t quite old enough for the beer now, but man just look at the gleam of her even white teeth, and didn’t she smell like spring come to life?

Yeah, the king of the underworld rode a motorcycle, and looked dangerous in a long black jacket; that’s not even a question. Hades had the kind of bike that you really had to sidle up to and jump on before it took off on its own. White and chrome and mean enough to make a girl blush while she holds on tight.

Darlin’, one of these days I’ll take you home with me, and we’ll be able to make some noise, the king of the underworld purred, a few nights later, but she didn’t really have plans to do any such thing. Which was fine; girls these days aren’t so naive about the way a bad girl might use poetry and sadness to get you all lathered up and ready to jump onto her bike and speed on back to her place. Don’t you like my place, the girl asked, the pink walls and trimmings positively labial in color. Positively pink, like her tongue, too.

Frankly, it worked well to have the king of the underworld ride off home into the horizon. The Southern blonde was pretty sure that Hades didn’t consider their relationship exclusive, judging by the little bruises and bite marks she wore regularly. And she sure the hell wasn’t the type of girl to go home with someone if they weren’t serious. Well, at least not until her mama caught the king of the underworld leaving one early morning, and said, goddamnit girl, I told you not bring your sin home with you. And look at this one, ain’t no chance she won’t do you wrong, she just smells of it, can’t you smell it? She’ll do you bad, this one.

Wasn’t too long into the argument before the Southern blonde found herself making claims of affection that she shouldn’t, to show her mama wrong.

Sometimes it’s pride that makes a girl do truly stupid things, and the Southern blonde took Hades’ hand and said, mama, you can’t talk that way about the king of the underworld, I love her, and sure enough her mama threw out on her pretty, round ass. Don’t come back ‘til she’s done with you, the tall, rough-handed farmer called, every bit as pretty as her daughter. The king of the underworld was smart enough to shut up and wait on the bike and not say a word. I give it six months, the older woman yelled up the stairs while her daughter did a hasty grab of her favorite belongings: a pink canvas backpack, her three favorite porcelain unicorn statuettes, her dad’s old army jacket, and enough underwear for a week.

The king of the underworld couldn’t take back the invitation to come home with her, not after all that, and plus it really it might be nice to get another woman in the place again.

Problem is, the Southern blonde, blue-eyed with heavy thighs, she didn’t have the same constitution as Persephone, the famous woman she so resembled. So after the tour of the room of souls — mostly storage for unlabeled boxes and garbage bags full of who knows what, and a quick yogurt and pomegranate seeds, she lay in the massive bed, under the sheets of pure midnight with the king of the underworld, thinking shit, maybe this was a bad idea, her heart slowed, and her body cooled.

And what the fuck was Hades supposed to do then but drink more whisky and pace and mutter to herself? The Southern blonde was definitely her problem once the girl was dead. Maybe it was her eatin’ those seeds, I suppose, murmured the king of the underworld.

Hades laid back down next to her new live-in and said This is pretty weird, babe. No pun intended of course. I’m too drunk for this shit, you know. Plus, I’m not much of a night sleeper. And off the king of the underworld went to play with her three-headed dog’s new puppies and think.

It probably should have scared the hell out of Hades the next morning when she went to go deal with the body and get some sleep and the Southern blonde was sitting up yawning, a little blue around the edges, but otherwise right as rain. I’ve never slept so deeply, she said, running her hands through oddly untangled hair. I don’t think I even dreamed.

Every night the Southern blonde fell into death once the sun laid down and closed its eyes, but the king of the underworld couldn’t think of a way to tell her, so Hades just nodded when her old lady said she’d never slept so well, every morning.

By the end of the first month the king of the underworld was bored with the whole goddamn thing, pissed off that she’d gone and fallen in love with the first girl she’d seen in ages, and the Southern blonde only spent half her damn time alive. To be honest, she was starting to worry the whole bad break up business with her first old lady had been her fault, and fuck all if she wanted to consider the past with so much intensity.

During the day, the king of the underworld would try to stay awake as long as possible, sacrificing sleep for tastes of the Southern blonde’s soft skin, or her wheaty scent afterwards.

Now, it’s true that at some point in the months they’d spent together the king of the underworld had taken to making the Southern blonde’s cooling body dance do the occasional tango, or sit up at bizarre tea parties, or watch all the films she declined to see during the day. You’re getting a bit weird, Hades said to herself in the mirror more than once. And no doubt she considered all the things she could be getting away in the dark hours of the night, but she stayed true. She was pretty proud of herself, too.

A few months in, the king of the underworld finally settled into a routine. She slept a little more during the day and it felt like the situation wasn’t so untenable. Hadn’t the Southern blonde been patient herself, dealing with some pretty lonely days, and giving up her pink room she’d liked so much? Hades thought, I should really do something nice, something special.

One morning a few weeks later, the Southern blonde woke up alone, no sign of the king of the underworld, and wandered through all the rooms she never went in, occupied as she was with Hades. She found the tea room of misery and wondered at the two settings, lipstick so like hers on the edge of one cup. In the ballroom of despair, the speakers hissed while the record player turned almost silently, album long since done.

Who was the king of the underworld spending time wooing like this, the Southern blonde wondered? All she knew was that her mama was right, it had only taken six months. She packed her meager collection of things back up and hitched a ride out of the horizon, up the highway towards home, ignoring the snow gathering on her shoulders and hair.

When the king of the underworld came home, white and chrome and mean pickup truck carrying cans of pink paint and newish blonde-wood furniture, she was surprised to find a note on the counter saying the Southern blonde didn’t know who Hades was dancing with at night, but she sure the hell knew she was going home. Everything has a season, she wrote, and our season has ended.

And the king of the underworld thought about jumping in the truck, roaring down the road, and bringing the Southern blonde back, but like the note said, the season had changed, and maybe Hades would turn her eye to brunettes.